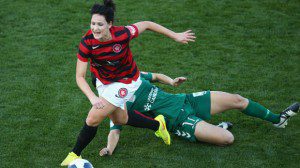 Jessica Seaman wins the ball at Campbelltown on Sunday against Canberra. Picture courtesy of the Wanderers

It wasn’t the start they were looking for, especially at Campbelltown Stadium, but the Wanderers’ W-League round one 4-1 loss to Canberra on Sunday will serve as a reminder how tough the competition will be this season for this young team.

Bright light for the Wanderers, Demi Koulizakis scored off the bench in her first ever Westfield W-League appearance and with fellow substitute Rhianna Pollicina looking very dangerous, it is with anticipation that the fans in attendance look forward to the Sydney Derby in Round 3.

The Wanderers started on the front foot but took a step backwards almost instantly when Michelle Heyman was the beneficiary of a long-ball from United keeper Chantel Jones to score in the second minute.

Undeterred the new-look Red & Black side kept up the intensity and created a number of chances with Helen Petinos and Michelle Carney making inroads. It was Carney in fact who almost grabbed the equaliser as Jones was only just able to clean-up a Jordan Baker through-ball with the Wanderers striker’s desperate attempt to get a foot to ball almost enough for it to go in the back of the net.

Moments later though Canberra doubled their lead as Heyman again capitalised on a long-ball to score past former team-mate Trudy Burke in a one-on-one. If that goal was cruel, Canberra’s third was torture as the Wanderers started the second half on top of the away team with numerous shots on goal but lacking a killer instinct. Canberra took advantage of the Wanderers’ inability to capitalise when Ellie Brush headed in from a corner.

While undoubtedly the better side throughout the match, Canberra’s third goal was tough on a brave Wanderers outfit who had not been outplayed but would live to regret errors at key times. By this stage the match was all but wrapped-up with a plethora of substitutes disrupting the free-flowing football of the first half.

Canberra’s fourth goal by Caitlin Munoz was followed by the introduction of Wanderers’ young guns Pollicina and Koulizakis, who made an immediate impact. Full of energy and with the game out of reach, the pair played without fear and impressed onlookers by attacking space and taking-on opponents. Their endeavours were rewarded when, in the 90th minute, Koulizakis found the ball at her feet in the box and with time to shoot, she made no mistake to grab a well-deserved consolation goal for the Red & Black.

The Wanderers continue their tough start to the season when they travel to Melbourne to take on the reigning Champions, Victory in round two of the competition.