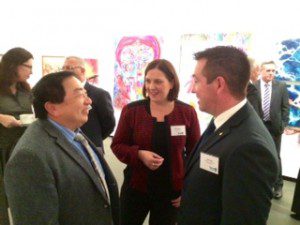 A ground-breaking initiative called the Small Business Friendly Councils (SBFC) Program, which aims to increase the number of NSW councils working proactively with the small business sector, was launched in Liverpool earlier today.

Minister for Local Government Paul Toole and the state member for  Menai Melanie Gibbons unveiled the program at Casula Powerhouse this morning.

“The SBFC Program has been developed by the Office of the NSW Small Business Commissioner in partnership with the NSW Business Chamber and is the first of its kind in Australia,” Mr Toole said.

“Councils which sign up to the SBFC Program will have the opportunity to review their procedures and practices in dealing with small businesses, make improvements where needed, explore new initiatives, and share small business friendly strategies with other councils.

“I am delighted to announce around 35 councils have committed to participate in the SBFC Program, ranging from large metropolitan councils to small regional councils.”

Ms Gibbons said the Western Sydney councils, including Liverpool City Council, that had signed up for the program so far should be commended for their willingness to take part in the initiative.

“Six Western Sydney councils have signed up. They will now be able to have a hand in this new collaborative approach by developing relationships with, and outreach to, local small businesses,” Ms Gibbons said.

Councils in the SBFC Program must make five key commitments, including:

reporting on business improvement processes and on-time payment policies in their operational plans;

Poor start for Wanderers, but it’s only round one
Liverpool finally becomes a university town