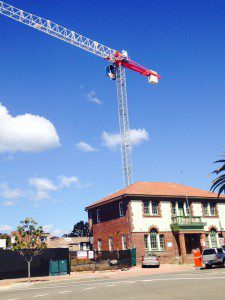 Will the School of Arts development house the mooted UWS faculty of architecture?

Liverpool is finally able to call itself a university town.

The South West Voice can exclusively reveal that the next University of Western Sydney campus will be located in Liverpool.

Our understanding is that the mooted Liverpool campus will house the faculty of architecture, a course currently not being offered by UWS.

Negotiations are presently taking place for the university to lease two floors of a building under construction, on the corner of Macquarie and Scott Streets at the southern end of the Liverpool CBD.

This is the so-called School of Arts development, a multi-storey retail/commercial building under construction.

Responding to questions from the South West Voice, a UWS spokesperson said:

“The University of Western Sydney is currently considering a UWS presence in Liverpool, with UWS and Council holding further talks last week regarding a possible university presence in the area.

“Discussion continues to be positive, with both parties agreed on the importance of increasing access to the highest quality education for Liverpool’s residents.

“Council and UWS will update the community as a priority should any decisions or agreements be reached.’’

Liverpool Council sources have confirmed that the mayor, Ned Mannoun, has been talking to UWS about locating a campus in the town.

The sources also confirmed that architecture would be the likely first faculty to be located in Liverpool.

And an associate of the School of Arts development confirmed that talks were being held with an unidentified party who had expressed an interest in leasing two floors.

Liverpool has been lobbying strongly for a university campus for the past few years and it looks like all that effort is about to bear fruit.

UWS, which already has campuses in neighbouring Campbelltown and Bankstown and other western suburbs areas, celebrated its 25 anniversary this year.

And the university was recognised as one of the top 100 young universities in the world in 2014.

More than 40 years experience in the news media, most of them as editor of local newspapers across the Sydney metro area, but a few years working as a sub-editor with the metros. Lots of awards, both as a reporter and editor, but says he values just as much Community Service Awards from Campbelltown City Council in 2004 and 2016. Took a voluntary redundancy in 2014 from Fairfax Community Newspapers after 21 years there. Loves the digital world, because ''there's no question it's the future''. Eric promises his hard hitting but fair approach won't change when he reports the news via cyber space.
View all posts by Eric Kontos
New program means business
Why south west is great