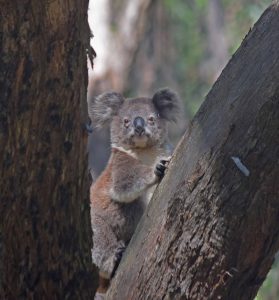 Over the past 12 months Conservation Volunteers Australia (CVA) has been gathering information about koalas that live between Campbelltown and the Southern Highlands.

As part of the Koala Conservation Project, CVA members have been working alongside the NSW Office of Environment and Heritage (OEH).

“Koalas are an icon of our region and to protect their future we need to gather as much information as we can to understand their behaviour,’’ says Adam Woods, the regional manager of CVA.

“CVA have been working closely with OEH since 2015, and we have provided information to help inform their research that will lead to us better understand this population of iconic koalas,” he said.

“The project has illustrated the broad range of tree species that are important to our local koala population and the vast array of wildlife such as glossy black cockatoos, lace monitors, echidnas and wallaroos.

“It is fantastic to involve volunteers in such valuable work, and provide them with an opportunity to experience the unique wildlife in our region,” Mr Woods said.

“CVA and their volunteers have been instrumental in helping us keep an eye on the koalas in the Wollondilly Shire,” says Ms Bell.

“Volunteers work alongside us to monitor where these koalas live, how they move about, what they are eating and where they shelter – providing invaluable data for the local Koala Conservation Project,” Ms Bell said.

But more volunteers are now needed to complee the project.

CVA, in partnership with South 32 – Illawarra Coal and OEH are calling on local residents to participate in citizen science surveys for koalas.

“Our dedicated volunteers have been tracking several koalas throughout the Appin and Wilton areas and we would love more people to come on board and assist with this project,’’ says Mr Woods.

Volunteers get firsthand experience radio tracking koalas and participate in collection of valuable data such as tree species, dimensions and habitat condition.

This project takes place on most Fridays throughout December, January and February, as well as the occasional weekend each month.

To find out more or to book your place head to the website conservationvolunteers.com.au or phone 4228 9246. 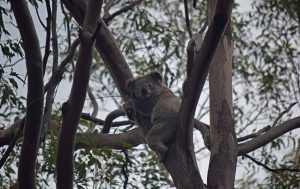 More than 40 years experience in the news media, most of them as editor of local newspapers across the Sydney metro area, but a few years working as a sub-editor with the metros. Lots of awards, both as a reporter and editor, but says he values just as much Community Service Awards from Campbelltown City Council in 2004 and 2016. Took a voluntary redundancy in 2014 from Fairfax Community Newspapers after 21 years there. Loves the digital world, because ''there's no question it's the future''. Eric promises his hard hitting but fair approach won't change when he reports the news via cyber space.
View all posts by Eric Kontos
Affordable fine dining: Bellbird set to shake up local restaurant scene
Fired up Foley challenges Berejiklian on stadiums: let the people decide