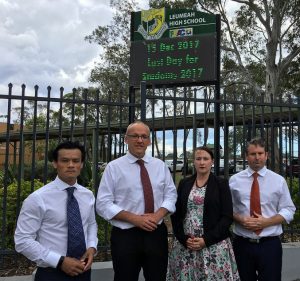 A fired up Luke Foley, the state opposition leader, today brought his campaign against the government’s controversial stadiums policy to Macarthur, and challenged the premier to let the people decide.

Speaking to local media reporters outside Leumeah High School – which has a $2.1 million maintenance backlog – the Labor leader said NSW Premier Gladys Berejiklian and her government were out of touch and had the wrong priorities.

“My challenge to the premier is walk down the main street of Campbelltown or Camden, do a bit of doorknocking at Oran Park or Macquarie Fields or any suburb in Macarthur and the South West of Sydney, and I guarantee the people will tell you they are totally opposed to spending a couple of billions of dollars on stadiums,’’ Mr Foley said.

Surrounded by local MPs Greg Warren and Anoulack Chanthivong and Labor’s Camden candidate, Sally Quinnell, the opposition leader didn’t hold back in his condemnation of the plan to demolish and rebuild the stadiums at Moore Park and Homebush.

“This is a red hot rort, they’re trying to ram through a stadium knockdown and rebuild in the eastern suburbs before the people get to vote on it at an election,’’ Mr Foley said.

“I say to the premier, if you’re so proud of your plan, let the people give it the thumbs up or down at an election.

“I think they’re out of touch and they have the wrong priorities,’’ the opposition leader said.

Mr Foley also warned footy fans across Sydney that if the new stadiums went ahead they would see less of their local teams playing in their suburban grounds.

“If there’s money to throw at stadiums, I’d rather upgrade Campbelltown Stadium than a stadium in Moore Park,’’ he said.

“This government’s stadium policy means you won’t see the Wests Tigers playing at Campbelltown Stadium anymore, because if you spend two and a half billion dollars on a couple of stadiums, you’d better play all the games there.

“With a miniscule percentage of what’s being spent on these two big stadiums you can upgrade the grounds at Leumeah, at Penrith, Kogarah, Leichhardt and Brookvale – and people can still have an attachment to the teams in their local areas.’’ 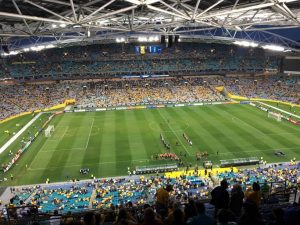 The Olympic Stadium, which hosted the 2000 Sydney Games, is one of two stadiums the state government wants to knock down and rebuild at a cost of around $2.5 billion. Labor leader Luke Foley today said they are out of touch and have the wrong priorities.

Mr Foley was asked what he thought of the government line that they are “spending $200 billion on health and education and just $2 billion on sport’’.

“What’s really going on here is they’re robbing from the health and education needs of the people to splurge on two new stadiums the people don’t want; people want their schools and hospitals to be world class, that’s what they want.

“Here in Macarthur you’ve got 200 demountable classrooms, kids learning in substandard environments, and if the government has $2 billion to splurge, the people are telling us, spend it upgrading schools and hospitals,’’ he said.

“Labor’s priorities are schools and hospitals, and we’ll be outlining our spending commitments well before the next election, 15 months away, we’ll spell out exactly what we’ll do.

“I can tell you we won’t be spending two and a half billion dollars on stadiums, we’ll be redirecting funds to the health and education needs of the people in places like Macarthur.’’

The Member for Macquarie Fields Anoulack Chanthivong said local parents “would be scratching their heads that Leumeah High School has a staggering $2 million maintenance backlog and yet this government prefers to fund stadium upgrades over classrooms and urgent repairs’’.

“It’s insulting and indicative of the contempt the Berejiklian Liberal Government holds for our local area. They simply don’t care,’’ he said.

“Our local students and teachers deserve the best possible learning environment, and I will always fight for our fair share.”

Member for Campbelltown Greg Warren added: “The priorities of the Liberal Government are completely out of whack.

“How can they let our schools and hospitals continue to decline but they see fit to blow $2.5 billion knocking down and rebuilding two perfectly serviceable sports stadiums?’’

Labor candidate for Camden Sally Quinnell said the “breathtaking waste and mismanagement of public money which Premier Berejiklian is presiding over should put an end once-and-for-all to the myth of the Liberals’ fiscal responsibility’’.

More than 40 years experience in the news media, most of them as editor of local newspapers across the Sydney metro area, but a few years working as a sub-editor with the metros. Lots of awards, both as a reporter and editor, but says he values just as much Community Service Awards from Campbelltown City Council in 2004 and 2016. Took a voluntary redundancy in 2014 from Fairfax Community Newspapers after 21 years there. Loves the digital world, because ''there's no question it's the future''. Eric promises his hard hitting but fair approach won't change when he reports the news via cyber space.
View all posts by Eric Kontos
Koala project needs a few more helping hands
Airds incident: 21 year old allegedly assaulted police officer

2 Responses to Fired up Foley challenges Berejiklian on stadiums: let the people decide