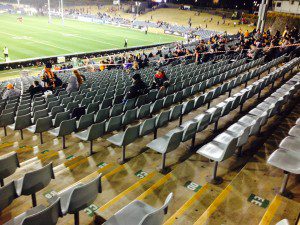 Campbelltown Council’s monthly meeting last Tuesday was not all finger pointing and navel gazing: some decisions were actually made by the time Mayor Paul Lake closed the meeting not long before midnight.

Cr Oates referred to a letter received from a resident outlining the historical importance of the reservoir, cattle tank and silt traps located in Hurley Park, noting that both the cattle tank and reservoir wall have been restored, however the two silt trap sandstone spillways remain in need of restoration.

“This is a beautiful place, a historical part of Campbelltown that deserves funding to be fully restored,’’ he said.

“This could be a big attraction right here in Campbelltown,’’ he said.

Council voted that an urgent report be presented investigating all possible funding grants available from Sydney Water or any other government department for the repair and ongoing maintenance of the two silt trap sandstone spillways and other heritage resources located at Hurley Park.

On another matter, the council decided to press ahead with a  valuation and the feasibility of naming rights to Campbelltown Sports Stadium.

It will make a decision once the findings are ready.

Also, it was decided that a delegation of Council including the Mayor, General Manager and relevant staff members meet as soon as possible with members of the West Tigers Board to discuss the future of the West Tigers at Campbelltown Sports Stadium and the Macarthur region.