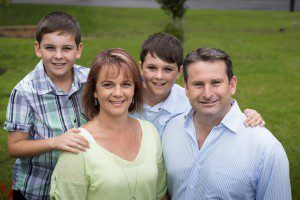 My family: Labor candidate for Campbelltown Greg Warren with his wife Simone and their two boys, Bailey, left, and Darcy.

These key words roll off his tongue, but Greg Warren also wants to you to believe that he truly cherishes such noble sentiments.

The Labor Party’s candidate for the seat of Campbelltown readily concedes that politics has a lamentable lack of these fine qualities.

But he says it’s also one of the major reasons he’s thrown his hat into the political ring in the first place.

It’s a lofty ambition – to inject integrity and honesty into Australian politics – and you’d doubt one man could be capable of it, but there’s another word that also describes Greg Warren – driven.

“Yes, I am driven,’’ he admits without hesitation when asked.

“There is nothing more important than for a person to look themselves in the mirror regularly, to be honest about themselves and ask how they can be better.

“I am driven to work hard to achieve outcomes so I do reflect on my performance to see how I can do better.’’

Mr Warren was born on Melbourne Cup day in Dubbo almost 41 years ago. He is one of three brothers

His father is a retired boilermaker, while his mother worked part time for Westhaven industries (a village for intellectually and physically disabled people). They both still live in Dubbo.

Mr Warren’s first career move was to enlist in the army at the age of 17, and while it only lasted 10 years, it led to him meeting his future wife, Simone, while being stationed at Holsworthy.

They were married at St Peters Anglican Church Campbelltown and have two boys, Bailey and Darcy, both of whom were born in Campbelltown Hospital.

Mr Warren lists son Bailey being diagnosed with cerebral palsy as one of the two major reasons he decided to enter politics.

“I realised soon after Bailey’s diagnosis how important it was to have good health services. And I also thought it would be very important to go into bat and fight for something like that,’’ he said.

The other event happened a few years earlier, and it was the collapse of the iconic Ansett airline and the loss of all the jobs, as well as the loss of entitlements for the airlines workers.

“With Ansett what I saw was the importance of looking after people in that situation, where government has a role to play,’’ he says.

“Again, I thought anyone with integrity and honesty could see that this was something worth fighting for.’’

It was a small step to go from wanting to be in politics to choose the Labor Party as the most appropriate route.

“I know the party has had some issues of late, but it still is the party that believes in fairness, in looking after people,’’ he says.

Before signing up, though, Mr Warren said he sought advice, and two key people, his mentors in life, his father and the former state member for Camden, Geoff Corrigan, convinced him the Labor Party offered the true path to what he sought to achieve in public life.

“The way I won the ballot shows that the Labor Party is prepared to change for the better,’’ he says.

Mr Warren is referring to the preselection, which saw two elections take place, one a popular vote among all local voters and a branch one. Each poll represented 50 percent of the overall vote.

“It was a wonderful exercise in democracy,’’ he says of the process.

Once he left the army, Mr Warren worked as truck driver and fuel operator while studying for a Diploma of Business.

He is currently close to completing a masters degree in business administration (MBA) and works as the Sydney Business Manager at Grace Records Management in Campbelltown.

When he decided to enter politics in 2008, the family was living in Mount Annan, where they had moved to in 1997, so he stood for Camden Council, and was duly elected. He was re-elected in 2011 and also served as mayor of Camden.

Which is why since his preselection for the seat of Campbelltown, people who don’t know him presume he’s from there, as in “he’s a Camden boy’’.

‘’That’s right, but the fact is I wanted to go into politics, into council, and I was living inside the Camden local government area at the time,’’ he explains. And he is still a Campbelltown ratepayer as he owns a property here.

He loves his sport and is a supporter of numerous sports organisations, including East Campbelltown Eagles Rugby League, Cobbitty/Narellan Cricket club, local netball clubs and many others.

He also is very active in Campbelltown, Narellan and Camden Chambers of Commerce along with other community groups and member of his local RSL sub-branch, YMCA and local Catholic Parish of St Clare

Like most of us who “migrated’’ to Macarthur in the past 40 odd years, Mr Warren says he loves the area.

“Simone and I feel truly fortunate to be raising our family in such a great place,’’ he says.

“Along with so many other wonderful locals, I reckon the goodness and hard working nature of our many communities is the very fabric of what makes our home and region the great place it is.’’