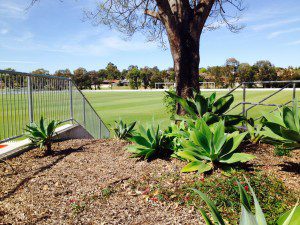 Raby Oval is ready to host the cricket competition of the 2014 Australian University Games.

IT’S one of the best club cricket grounds in Sydney so it’s no surprise Raby Sports Complex – or Raby Oval as most locals know it – has been selected to host the cricket component of the 2014 Australian University Games.

Since its inception in 1993, the Australian University Games has grown to be Australia’s largest annual multi-sport event. Held each September/October, the Games are renowned for providing a friendly but competitive environment for Australian university athletes and is the flagship event on the national university sporting calendar.

Each year the Games sporting schedule is made up of more than 30 individual and team sports with an expected 6,000 competitors.

In 2014, the Australian University Games will be held in Sydney from September 28 to October 3.

Venues for the various sports include Sydney Olympic Park, Blacktown

Cricket is included and will be played as a T20 competition. Last year’s Australian University Games cricket champions, the University of New South Wales have just returned from London after competing in the World Cricket Championships for the best six university teams in the world.

Raby Sports Complex with four adjacent turf wickets will host the majority of the competition, including all semi-final and final games. Jackson Park at Woodbine will also be used for some matches. The other venues will be the Village Green at the University of New South Wales and David Phillips Field at Daceyville.

Campbelltown Council is responsible for preparing the venue for play each day and the Campbelltown Camden District Cricket Club is supplying the competition coordinator as well as running the canteen and catering for the week.

“The selection of Raby Sports Complex to host a majority of the cricket competition will allow spectators and competitors from all over Australia to experience the impressive facilities that Council provides and reinforce the positive image of the Campbelltown Local Government Area,’’ said a report to Campbelltown Council last week.

More than 40 years experience in the news media, most of them as editor of local newspapers across the Sydney metro area, but a few years working as a sub-editor with the metros. Lots of awards, both as a reporter and editor, but says he values just as much Community Service Awards from Campbelltown City Council in 2004 and 2016. Took a voluntary redundancy in 2014 from Fairfax Community Newspapers after 21 years there. Loves the digital world, because ''there's no question it's the future''. Eric promises his hard hitting but fair approach won't change when he reports the news via cyber space.
View all posts by Eric Kontos
Council acts on stadium naming rights, reservoir restoration
Anoulack first to throw hat in Macquarie Fields ring