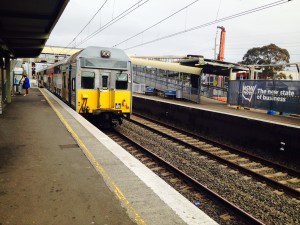 Avoid a near miss or serious injury around train tracks is the message to South West Sydney commuters this week as police target individuals taking risks at level crossings and in rail corridors.

Each month the Independent Transport Safety Regulator receives up to 10 reports of near hits from train drivers at level crossings.

Each near miss can cause considerable damage to infrastructure as well as disruption to commuters.

They detected level crossing offences at around 100 individual sites spread over 64 towns throughout the state.

In 2013 there were also 93 people arrested and 208 infringements issued for pedestrians entering rail corridors and/or crossing running lines under the Passenger Transport Regulation 2007.

“This week highlights the need for all motorists and commuters to be vigilant around train lines and level crossings.

“Pushing the limits at level crossings to beat a train is dangerous and risky, and losing your life rather than waiting a few moments is incomprehensible.

“Police will be out to ensure all drivers use caution at level crossings by stopping when appropriate; as well as remaining alert and focussed, not using mobile phones or being distracted whilst driving,” Senior Sergeant Timms said.

“Police Transport Command will be out targeting those trespassing on train tracks and in rail corridors as what can only be described as extremely dangerous behaviour.

“Entering rail premises to take a shortcut or to graffiti different areas places you at serious risk of being hit by a train and possibly killed.

“We are out patrolling trains day and night and will take action against those holding up the commuting public or putting themselves and others at risk,” Inspector James said.

More than 40 years experience in the news media, most of them as editor of local newspapers across the Sydney metro area, but a few years working as a sub-editor with the metros. Lots of awards, both as a reporter and editor, but says he values just as much Community Service Awards from Campbelltown City Council in 2004 and 2016. Took a voluntary redundancy in 2014 from Fairfax Community Newspapers after 21 years there. Loves the digital world, because ''there's no question it's the future''. Eric promises his hard hitting but fair approach won't change when he reports the news via cyber space.
View all posts by Eric Kontos
Hitchcock thriller at Casula
A true blue Labor Party soldier, Laurie Ferguson eyes retirement