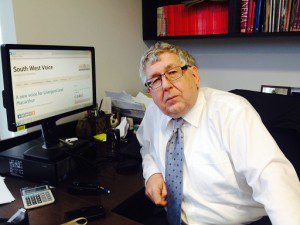 So long: This will be the last term for the member for Werriwa Laurie Ferguson, pictured here in his Ingleburn office checking out the South West Voice website.

Laurie Ferguson is a typical, down to earth Labor Party stalwart and it’s no surprise that he makes no fuss about the fact that this will be his last term as the federal member for Werriwa.

”Yep, had enough, retiring,’’ he tells me in his Ingleburn office this afternoon. He may as well have said, wait, I will make a cup of tea.

Add six years in state parliament as the member for Granville, and it has been a particularly long innings for the man with the famous political name.

His father Jack was deputy premier in NSW to ‘’Nifty’’ Neville Wran between 1976 and 1984, and of course his brother Martin was a minister in the Gillard Government.

The dynasty extends by marriage to the state member for Liverpool, Paul Lynch, who married Laurie’s sister.

‘’Dad didn’t want us to go into politics,’’ Laurie recalls.

”He wanted me to be a lawyer and Martin to be a dentist.

”But once we went into politics, dad was very supportive.’’

Just before the 2010 election, the one that produced a hung parliament, Ferguson became embroiled in a controversial move to a new seat, his current one, Werriwa.

Which meant displacing the very popular Chris Hayes, who got elected to the seat in 2005 in a by-election after then member Mark Latham pulled the pin in the wake of a humiliating defeat as ALP leader, to John Howard at the 2004 election.

Ferguson explains the details of what went on, the way he saw it of course, and it’s not only very complicated but it also has a cast of thousands.

Well, not thousands, but when even the notorious Joe Tripodi apparently had a major role in this political saga, you can’t help wondering how the Australian Labor Party has not self destructed in the past 100-odd years since its formation.

The term ‘’byzantine politics’’ doesn’t come anywhere near describing what went on as Ferguson was parachuted into Werriwa despite howls of local protests, and Hayes to Fowler – when logic dictated it should have been the other way around.

‘’I could see the logic of Chris staying in Werriwa and me stepping into the vacant Fowler, but that’s not how the Labor Party factions works,’’ Ferguson recalls.

He won that election, and last September managed to hang on, despite dire predictions that he would be washed away in an anti-Labor landslide.

But before that he had to face a Labor Party preselection, which obviously would have been a test of whether he had won over the local branches after being parachuted into the seat three years earlier.

Ferguson polled 93 per cent of the vote to fend off his challenger, but does not gloat about the result. He was more effusive about beating the Liberals in the actual election in September.

”That was very satisfying, because it was probably the only chance the Liberals may get to win the seat from us,’’ Ferguson says.

Ferguson entered federal politics as the member for Reid at the age of 38 and full of idealism about helping to make the world a better place.

”I wanted to go to Canberra because I was always interested in egalitarianism, immigration, multiculturalism, those sort of issues,’’ he says.

He played a pivotal role over Timor gaining its independence, and generally fought the good Labor battles to ensure Australia stayed an egalitarian society – the land of the fair go

And he is still fighting those battles, especially the current government plans to introduce a $7 co-payment when visiting the doctor.

‘’We have a very good health system compared to America, and it’s worth protecting,’’ he says.

In 1970, with a bunch of mates, a young Laurie Ferguson went to the movies in the city and fell in love with film after watching the classic movie Far From The Madding Crowd.

He’s been a film buff ever since and once he’s finished in politics in a couple of years he plans to really get stuck into films as a hobby.

In the meantime though, there’s a few more battles to fight for the Labor Party.

More than 40 years experience in the news media, most of them as editor of local newspapers across the Sydney metro area, but a few years working as a sub-editor with the metros. Lots of awards, both as a reporter and editor, but says he values just as much Community Service Awards from Campbelltown City Council in 2004 and 2016. Took a voluntary redundancy in 2014 from Fairfax Community Newspapers after 21 years there. Loves the digital world, because ''there's no question it's the future''. Eric promises his hard hitting but fair approach won't change when he reports the news via cyber space.
View all posts by Eric Kontos
Avoid serious injury: Police message to commuters for rail safety week
Meet the world’s first family robot