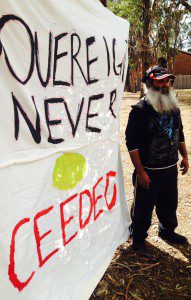 Uncle Mud’d is a local Aboriginal elder who is adamant that cutting down trees in bushland behind Airds shopping centre is plain wrong.

”These trees,” he says, pointing to large gumtrees behind what some have described as an Aboriginal embassy, ”are on tribal land and nobody asked the tribal elders for permission.”

”We plan to keep doing this until our message is heard,” Uncle Mud’d says.

Uncle Mud’d and Koori Pete, together with several other indigenous members, have set up tents and built a fire – using the surveyors’ pegs which mapped the new road – as both a protest of the redevelopment of Airds and to send a message that some of Campbelltown’s indigenous people won’t tolerate being walked over.

”There’s another potentially bad effect if we let the trees get chopped down and the road is built,” says Koori Pete.

”This new road will make it easier for people in Airds to have access to other pubs, such as the one in Bradbury.

”But it’s also because the trees are on tribal land, plus it’s a known koala corridor around here,” he says.

Koori Pete says there’s more than 500 indigenous people who call Airds home, so the overall redevelopment will also impact on them in a big way.

”Where will these people go to live once their houses have been knocked down,” he says.

”We’ve seen what they did at Minto, which is the same plan and that was a disaster.”

The South West Voice asked the group how long they planned to continue with their protest, which started earlier this week.

”As long as it takes to get our message out there,” was the answer.

More than 40 years experience in the news media, most of them as editor of local newspapers across the Sydney metro area, but a few years working as a sub-editor with the metros. Lots of awards, both as a reporter and editor, but says he values just as much Community Service Awards from Campbelltown City Council in 2004 and 2016. Took a voluntary redundancy in 2014 from Fairfax Community Newspapers after 21 years there. Loves the digital world, because ''there's no question it's the future''. Eric promises his hard hitting but fair approach won't change when he reports the news via cyber space.
View all posts by Eric Kontos
Some serious Mud Fun for our Riverfest
Commuters win with Holsworthy station car park extension