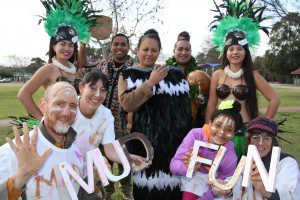 The Pacific dancers and Mud Fun will be part of this year’s Riverfest festival in Campbelltown on August 30.

Mud, mud, glorious mud! If you’ve ever wanted an excuse to squish your toes into some sloppy, ooey, gooey mud, then Campbelltown’s upcoming Riverfest is your chance.

For the first time, Mud Fun will be appearing at Riverfest on Saturday, August 30 to promote mud as a way of connecting communities back to the earth. The group will lead some communal mud stomps to the rhythm of live drums and involve people in using mud to create a host of mud bricks. The bricks will be sun-dried and used to build creative designs or turned into practical community projects.

Mud Fun is renowned for its sustainable practices and community initiatives. The group will showcase some of its recent works in Picton and Claymore through a photographic display at Riverfest. The Claymore project involved turning mud bricks into a community wood fired oven and stove.

The mud fun workshop will be one of many interactive workshops on offer at Campbelltown City Council’s Riverfest, which will be held in Koshigaya Park from 11am to 3pm.

Try your hand at kirigami, a variation of the Japanese craft origami, which involves cutting and folding paper to create an array of fantastic ‘pop-up’ designs such as snowflakes or orchid blossoms. There’ll also be sushi tasting and a variety of Japanese cultural displays celebrating the 30th anniversary of the Campbelltown-Koshigaya Sister City relationship.

Create a Rio carnival style mask, feather headdress or beaded necklace in the wake of the FIFA World Cup atmosphere, plant your own seedling and watch it grow as part of a workshop hosted by Macarthur Centre for Sustainable Living, or create your own mini water cycle. There’ll also be a chance to learn Maori cultural arts and crafts, or set out on an adventure along the Riverfest Passport trail for the chance to win some great prizes.

Mayor of Campbelltown, Councillor Clinton Mead, said Riverfest was a chance to celebrate our city’s diversity and learn more about creating a sustainable future.

“A series of hands-on and practical workshops complement Riverfest’s colourful entertainment and vibrant atmosphere, and makes this event one not to be missed,” Cr Mead said.

“Be sure to bring some clothes suitable for muddy fun, and your enthusiasm, so you can experience all that is on offer throughout the day.”

Riverfest is coordinated by council in association with the National Parks Association and Macarthur Diversity Services Initiative.

More than 40 years experience in the news media, most of them as editor of local newspapers across the Sydney metro area, but a few years working as a sub-editor with the metros. Lots of awards, both as a reporter and editor, but says he values just as much Community Service Awards from Campbelltown City Council in 2004 and 2016. Took a voluntary redundancy in 2014 from Fairfax Community Newspapers after 21 years there. Loves the digital world, because ''there's no question it's the future''. Eric promises his hard hitting but fair approach won't change when he reports the news via cyber space.
View all posts by Eric Kontos
More road fatalities caused by drug drivers
Aboriginal tent embassy protests Airds redevelopment