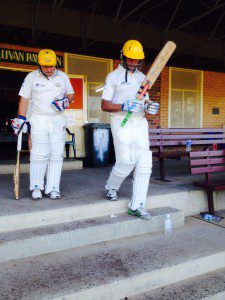 Just three overs: The Lions openers walk out to face the Sutherland bowlers just before stumps.

YOU are just 17 years old, it’s your very first game in the top grade, your captain tosses you the ball, you look up and at the other end waiting to face your bowling is Test batsman Steve Smith.

That was the scenario for debutant Fairfield Liverpool Lions youngster Luke Ohrynowski today at Rosedale Oval as the 2014-15 Sydney grade cricket competition got under way against Sutherland.

Young Luke managed to keep his composure and completed his maiden over in first grade cricket by conceding just one run to Test bat Smith, who went on to make 42.

The Westfield High student, who is a leg spinner and middle order batsman, snared his first wicket in the last session, before nabbing a second one to finish with the respectable figures of 2 for 47 for the day.

As a result, Sutherland collapsed, losing six wickets after tea to be all out for 281. Just after tea they were 4 for 209 and would have been looking for a score well in excess of 300. Closer to 350 maybe.

But a superb bowling effort from Lions veteran Anthony Clark, who finished with 5 for 67, kept the scoring rate down during the course of the afternoon, especially after tea as wickets fell at a regular rate.

Once Sutherland were all out, there was just enough time for the Lions openers, Wendel Delpechitra  and Dean Attard, to face three nervous overs before the close of play.

When stumps was called the Lions had managed to survive intact to be 0-21 and will return to Rosedale Oval next Saturday requiring 261 more runs to overtake Sutherland and grab first innings points.

Which won’t be easy as Sutherland showed in those three overs they would adopt very aggressive tactics in order to stay on top, setting a very attacking field, including three slips, gully and point, as well as square leg. Play will once again start at 9.30am next Saturday.

*At Coogee Oval, on the first day of their match, the Campbelltown Camden Ghosts batted first and finished with 283, the highlight being a big hundred, 129, by Ryan Gibson. Adam Coyte managed 49 runs before being dismissed. In reply, the home side, Randwick Petersham, finished the day on 2 for 67. 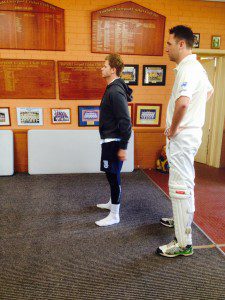 Test batsman Steve Smith, left, watches the AFL grand final inside the rooms at Rosedale Oval this afternoon. Smith made 42 before being dismissed.