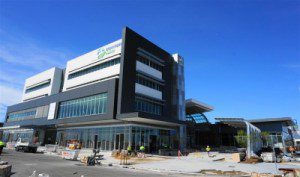 Geoff Starr from the NSW Business Chamber will be the guest speaker at the next dinner meeting of Ingleburn chamber of commerce at Ingleburn RSL on Wednesday, October 8, starting at 6.30 pm.

Mr Starr will provide chamber members with a current update on the world of business and items of
interest from the viewpoint of the NSW Business Chamber.

The chamber is consulting with members about the proposed change

Ingleburn chamber’s next big event is Gladys Berejiklian, Minister for Transport, speaking at a combined chamber lunch on November 21.

The lunch is being held at Wests Leagues Club at Leumeah at 11.30 for noon and will finish at 2pm.

This will be a good opportunity for members to interact with Mr Tosi and some of his key personnel.

IN other business news, Narellan chamber of commerce’s next general meeting is on Wednesday, October 8.

Guest speaker will be Mark Perich, the project director of Oran Park Town and the meeting at Harrington Grove Country Club is scheduled 6pm for 6.30pm.

Mr Perich will be giving an update on the progress of Oran Park Town, with a focus on Oran Park Podium (pictured), which was due to open in late September.