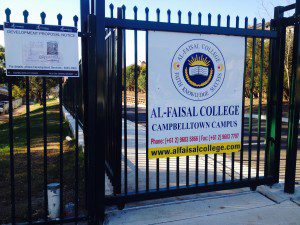 Police have charged a man with being armed and with intent to commit an indictable offence following an incident in a Campbelltown school on Thursday.

Police say that at about 2.10pm on Thursday (September 25) a man armed with a knife entered the premises of Al-Faisal College in Benham Road, Minto.

It is alleged the man spoke with a female staff member at the school, left a short time later and was last seen in Kitson Road.

No one was injured during the incident.

Following an appeal for public assistance, about 8.30pm last night (Friday, September 26) a 21-year-old man attended Campbelltown Police Station, where he was arrested.