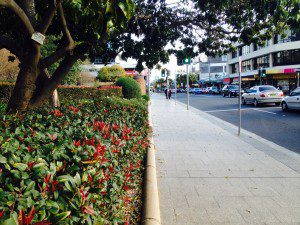 Cr Lake, who rejected suggestions the town had given up on trying to revitalize Queen Street, said people needed to remember council didn’t own the buildings on either side of our ‘high street’.

“Sure, we own the road, and the carparks behind the shops on both sides,’’Cr Lake said.

“But we don’t own the buildings so we can’t develop the commercial/residential that’s needed to kick start a retail improvement in Queen Street,’’ the mayor said.

Cr Lake, who was narrowly elected mayor on Monday, September 15, said he was keen to provide the leadership required to get things moving in Queen Street, which has been in steady decline for years.

The finger of blame is usually pointed to the development of Macarthur Square more than 30 years ago.

“I really think that if we can get one decent commercial/development built, it will get things moving,’’ Cr Lake said.

“But nobody’s given up on Queen Street.’’

The new mayor also said he was not concerned that the first council meeting he chaired was robust bordering on fiery.

“No, not really concerned. I plan to continue chairing the meetings in the usual way, giving everyone a fair go, that’s the main thing from my point of view.

“I have heard of very fiery meetings in years gone by and I don’t think this one was anywhere near that.’’

Cr Lake said there had not been any progress on scheduling a meeting with the new Wests Tigers board to discuss the club’s Campbelltown plans for the future.

“But we’re ready, and if the Wests Tigers were to prepare a business plan that included us we would be happy to sit down with them to see how it will work,’’ Cr Lake said.

The mayor said he was looking forward to Campbelltown’s annual festival, including the parade, which starts in November.

“It is a very popular festival as you know and this year we are marking the 30 years of our sister city relationship with Koshigaya, so there will be a Japanese theme.

“But our festival is about a ghost, and yep, it’s great. With the parade there are limits on what you can do these days with all the legal requirements such as occupational health and safety, but it’s still very good.

“I am looking forward to the parade and the festival.’’

Out of the bunker: Ingham Institute’s reveal of cancer technology
Man, 21, faces court over school incident