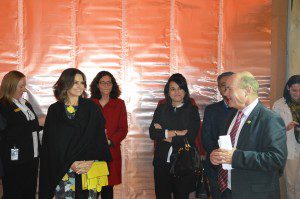 The flagship project that will be a first for Australia and one of only three in the world, the Ingham Institute’s MRI-Linac combines an MRI scanner with a Linear Accelerator for research into cancer therapy and treatment.

The new technology is set to improve the precision and accuracy of radiotherapy. Current radiotherapy practices are limited to account for changes that occur to the location and shape of tumours.

By combining an MRI with a Linac accelerator the Ingham Institute’s MRI-Linac system will enable a super-charged view of the tumour to ensure more precise and accurate treatment for cancer patients.

The Research Bunker is made up of concrete walls of up to 1.5 metre thick and is designed to contain two powerful forces of nature that will be combined, controlled and directed by institute scientists to develop the MRI-Linac into a powerful high-tech machine to help fight cancer.

The group, led by Professor Paul Keall from the University of Sydney, is currently conducting a comprehensive research program to commission and develop a first-generation MRI-Linac.

Achieving a significant milestone, the MRI-Linac group was awarded a $5.7 million program grant from the National Health and Medical Research Council (NHMRC) in December 2011, which resulted in a substantial contribution to infrastructure and research elements of the project.

Once the MRI-Linac is operational it will set a new benchmark for cancer treatment in Australia, with the potential to dramatically reduce side effects and improve patient cancer treatment outcomes in over 50 per cent of all cancer patients.

Providing strong evidence for its efficacy, a study published in July 2011 by Prof Keall and collaborators in the international journal Medical Physics modelled key components of the MRI-Linac and supported the high-quality of the technology.

More than 40 years experience in the news media, most of them as editor of local newspapers across the Sydney metro area, but a few years working as a sub-editor with the metros. Lots of awards, both as a reporter and editor, but says he values just as much Community Service Awards from Campbelltown City Council in 2004 and 2016. Took a voluntary redundancy in 2014 from Fairfax Community Newspapers after 21 years there. Loves the digital world, because ''there's no question it's the future''. Eric promises his hard hitting but fair approach won't change when he reports the news via cyber space.
View all posts by Eric Kontos
Safer Deadmans Creek bridge finally on the way
Mayor says Queen Street needs a circuit breaker