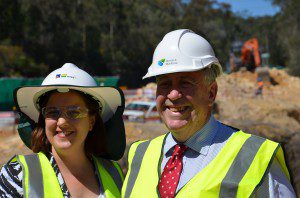 Site inspection: Melanie Gibbons and Duncan Gay. Below, the minister and the MP with site workers.

After inspecting the site this week, NSW Minister for Roads and Freight Duncan Gay and Member for Menai Melanie Gibbons have announced that Deadmans Creek bridge is on track to open to traffic in 2015.

“It is great to see work is well under way to replace the Deadmans Creek bridge on Heathcote Road at Sandy Point, with excavation of the site taking place to prepare for the start of major building work,” Minister Gay said.

“Earthwork is being carried out where bridge piers and new retaining wall will be installed until the end of November, when major building work will start.

“Geotechnical investigations are nearing completion and work to prepare for piles to be inserted is well under way,” Minister Gay said.

“Roads and Maritime Services started clearing work in July to establish the site compound with concrete barriers installed to create a safe work area and signs and traffic control implemented.

Ms Gibbons said by November major building work would start on this vital project to improve safety for all road users, including heavy vehicles.

“Intersection improvements are also being carried out with dedicated left and right turn lanes built southbound from St George Crescent and a raised median and two left turn islands will be installed to improve safety for vehicles turning into Heathcote Road,” Ms Gibbons said.

“When completed, there will be a safer, wider alignment of this section of Heathcote Road.”

Changed traffic conditions will be in place between 9pm and 5am from Sunday to Friday, on weekdays between 7am and 6pm and between 8am and 1pm on Saturday.

“The bridge expected to open to traffic by December 2015,” Ms Gibbons said.

Minor delays are expected as work takes place and motorists are asked to reduce their speed limit and follow the direction of traffic controllers and signs in place. 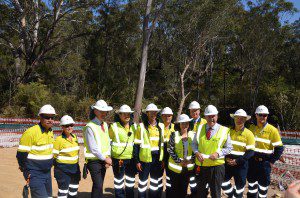 New road accident rules from October 15
Out of the bunker: Ingham Institute’s reveal of cancer technology