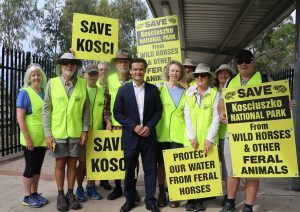 Support: MP Anoulack Chanthivong and some of the Save Kosci walkers at Glenfield Station this morning.

There are several reasons why local MP Anoulack Chanthivong was up early this morning to welcome to his electorate a group of walkers on their way to Mt Kosciuszko.

The walkers are part of the Save Kosci campaign, a 35-day, 560km, 790,000-step walk organised by community, conservation and bushwalking groups to highlight what they believe is the destruction occurring in the Kosciuszko National Park.

“The overwhelming response to my Stop the Squeeze survey and Hands off Hurlstone campaign demonstrates just how highly local residents appreciate the environmental value of green open spaces so I wanted to show my support for the Save Kosci walkers who won’t stand by as the Gladys Berejiklian and the Liberals trash our environmental heritage,’’ said the Member for Macquarie Fields after meeting the Save Kosci walkers at Glenfield station.

“Whether its overdevelopment as a result of an unfair planning agenda or the destruction of our only national alpine park, the Liberal Government shows time and time again it has all the wrong priorities.

“I congratulate the committed Save Kosci walkers trekking all the way to the summit of Mount Kosciuszko and their supporters, and I wish them well as they travel through our patch here in Macquarie Fields,” Mr Chanthivong said.

The state government passed laws this year that Labor says jeopardise the fragile flora and fauna in Kosciuszko National Park, ignoring the science and the irreversible damage that unmanaged wild horse populations have done to the park and the unique threatened species that live there.

Mr Chanthivong says Labor opposed the laws and has committed to repeal them if elected to government in 2019.

He has also used the opportunity to again highlight the destruction of national parks that has occurred under the current government, including:

For more information on the walkers, the campaign and their stories go to https://savekosci.org/for-media/

More than 40 years experience in the news media, most of them as editor of local newspapers across the Sydney metro area, but a few years working as a sub-editor with the metros. Lots of awards, both as a reporter and editor, but says he values just as much Community Service Awards from Campbelltown City Council in 2004 and 2016. Took a voluntary redundancy in 2014 from Fairfax Community Newspapers after 21 years there. Loves the digital world, because ''there's no question it's the future''. Eric promises his hard hitting but fair approach won't change when he reports the news via cyber space.
View all posts by Eric Kontos
One big happy family on Wollondilly Council
High immunisation rates get thumbs up