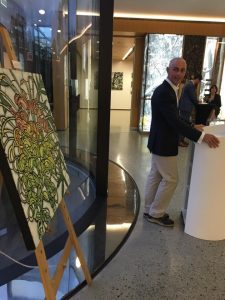 The exhibition celebrates 30 years of the wonderful botanic garden that separates Campbelltown from Camden – the “jewel in the crown’’ as guest speaker Camden MP Chris Patterson (pictured left) quite rightly called it.

Cr Lowry told us Wollondilly councillors were working well together for the good of the shire.

“Oh, we have a few disagreements now and again, but nothing to stop us enjoying a drink together afterwards,’’ he said.

There’s plenty of 50 year anniversaries this year, most notably the electrification of the railway line to Campbelltown.

We received a very kind invitation from current president Murray Kear, in which he informs us that they were expecting a good turnout, including 15 Rotarians from the Rotary Club of Koshigaya, sister city of Campbelltown.

Readers may think politicians running behind schedule is what really annoys journos, and they could be right.

But after the opposite happened last Wednesday, we’re starting to think being late is a blessing in disguise.

We were told that at 10.30am sport minister Stuart Ayres and Cricket NSW CEO Andrew Jones would join Campbelltown mayor George Brticevic for an announcement.

Well, we made an effort, really did, got there at 10.27am, only to be told, sorry, it’s already happened.

Now we know how commuters feel if they miss a train because it arrived earlier than it was scheduled.

Attention all gun gift wrappers, the Kids of Macarthur Health Foundation needs you.

The annual gift wrapping stall at Macarthur Square is one of the important fundraisers for Kids of Macarthur.

There’s various day, afternoon and evening times available, so if you can volunteer a few hours between December 3 and December 24 visit the website for more information. 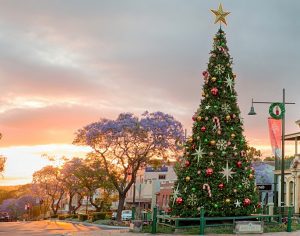 It is the season of festivals, with Fisher’s Ghost in Campbelltown in full swing.

At the end of the month neighbours Camden will hold their inaugural Jacaranda Festival, a three day celebration of all things Camden from Friday, November 23 to Sunday, November 25.

We saw plenty of familiar faces both in the festival parade and among those who had lined up in Queen Street to watch this year’s procession.

The first one was that of our old colleague Jeff McGill, who was busy taking pictures as he has done for a few years now, but waved back when we called out his name.

A lot of people may not realise that Jeff has always dabbled in photography, so it’s not just something he picked up since his departure from fulltime work at Fairfax Media. 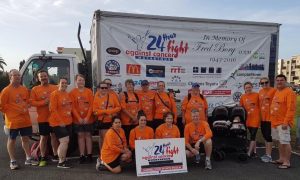 Talking about the parade, we were wondering where 24 Hour Fight Against Cancer chairman Warren Morrison was because he wasn’t walking alongside members of the committee.

However a visit to Facebook solved the mystery: Mr Morrison was driving the 24 Hour truck.

He is pictured at right when the team assembled for a photo at Campbelltown Showground before they set off on the 2018 parade.

More than 40 years experience in the news media, most of them as editor of local newspapers across the Sydney metro area, but a few years working as a sub-editor with the metros. Lots of awards, both as a reporter and editor, but says he values just as much Community Service Awards from Campbelltown City Council in 2004 and 2016. Took a voluntary redundancy in 2014 from Fairfax Community Newspapers after 21 years there. Loves the digital world, because ''there's no question it's the future''. Eric promises his hard hitting but fair approach won't change when he reports the news via cyber space.
View all posts by Eric Kontos
Festival buzz pointing the way forward for main street
Why Save Kosci campaign resonates in our neck of the woods