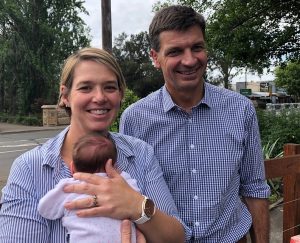 Wollondilly one-year-olds have recorded the highest rate of immunisation across Australia.

In the September 2018 quarter, 98.7 percent of all babies aged 12-15 months in Wollondilly had been fully immunised.

New data for the September 2018 quarter shows the national immunisation rates for five year olds was 94.62 percent, which is the highest figure on record, up from 94.42 per cent in the June quarter.

“Immunisation saves lives and protects lives and it is important that we keep the public informed about its benefits,” says local federal MP Angus Taylor.

He said the number of Australian children who were fully immunised was continuing to increase to record levels.

“More parents are getting the message to protect their children with life-saving vaccines.”

“We are big believers in immunisation. We’ve made sure our three other children are fully immunised and will do the same for baby Leta,” Ms Sharpe said.

From July 1 this year, every 12-month old in the country is now eligible for a free ACWY meningococcal vaccine and every expectant mother given the opportunity to vaccinate against the whooping cough with a free vaccine.

Last month, the Australian Government announced it would invest $52 million to protect Australian teenagers against meningococcal by putting the meningococcal A, C, W and Y vaccine on the National Immunisation Program from April 2019.

Mr Taylor said immunisation rates were high right across his electorate of Hume, which includes Southern parts of the Macarthur region.

“The immunisation rate for one year olds in Camden sits at nearly 96 percent and over 97 percent for five year olds.

More than 40 years experience in the news media, most of them as editor of local newspapers across the Sydney metro area, but a few years working as a sub-editor with the metros. Lots of awards, both as a reporter and editor, but says he values just as much Community Service Awards from Campbelltown City Council in 2004 and 2016. Took a voluntary redundancy in 2014 from Fairfax Community Newspapers after 21 years there. Loves the digital world, because ''there's no question it's the future''. Eric promises his hard hitting but fair approach won't change when he reports the news via cyber space.
View all posts by Eric Kontos
Why Save Kosci campaign resonates in our neck of the woods
Right turn signal could save lives at this intersection