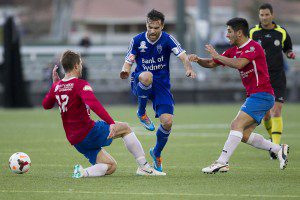 It wasn’t meant to be: The Bonnyrigg White Eagles were eliminated in a penalty shootout against Sydney Olympic. Picture: Football NSW

Sydney Olympic won a penalty shootout 5-4, even with the disadvantage of going second, after the match against the White Eagles had ended 1-1 despite 120 thrilling, absorbing minutes.

For Bonnyrigg the fall guy was Aaron Peterson, whose spot kick was brilliantly saved by Henderson.

It was a wonder that Gobbo was involved at all. The young goalkeeper went on at half time, replacing the injured Tristan Prendergast. With Matthew Nash already ruled out by injury, it was another cruel blow to Bonnyrigg.

But, the truth is that Olympic deserved to win. They had William Angel sent off early in the second half, but they still attacked with verve and looked the more likely winners, even before penalties.

Taiga Soeda and Go Shirai were phenomenal. Their combinations in attack and their dedication to defence meant that Olympic made light of being a man down and to split them for man of the match honours would do one an injustice.

Right back Brayden Sorge was outstanding, too, while Henderson again showed his value between the sticks.

Olympic will go forth to play Blacktown City in the showpiece next weekend, while the premiers Bonnyrigg are vanquished.

Shirai had a glorious chance to open the scoring in the 14′ minute, when some beautiful play saw him in behind the Bonnyrigg defence, but he lashed his shot straight at Prendergast.

Olympic was on top in the early exchanges and when Dimitri Hatzimouratis and Harris Gaitatzis linked up with a one-two on the edge of the area, Gaitatzis shot straight at the Bonnyrigg keeper.

Prendergast then picked up a forearm injury in a clash, one which he carried through the rest of the half before he was replaced by Gobbo.

Whether it was Prendergast or Gobbo in goal, neither would have had a chance with the goal, in the 43′ minute.

More nice play saw Soeda released on the left and when he whipped in a teasing cross, Shirai needed no invitation to flick a wonderful header into the back of the net, sparking wild celebrations among the Olympic faithful. Coming as it did shortly before the break meant that Olympic could take a well deserved lead into the sheds.

Brian Brown sent on Gobbo for Prendergast at the break, as well as Jordan Crighton for Alex Mansuetto.

What followed turned the game on its head. Angel had already been booked and he went down under pressure from Crighton, referee Kris Griffiths-Jones brandished a yellow card for Angel, sending him off and ruling him out of the grand final.

Brown reacted immediately, sending on Ken Chun for Ben Spruce and reverting to a back three.

As they did in the Rockdale City match in the first week of the finals, Olympic sat deep, inviting Bonnyrigg to pressure them. The difference, this time, was that Olympic was playing with a man fewer.

Gobbo passed his first test on the hour mark when he caught a corner swung in right above his head. It would not be the first test for the youngster.

A minute later Younis missed a superb chance, heading over an inviting cross from Tynan Diaz.

He didn’t miss in the 71′ minute though, when Griffiths-Jones awarded a penalty for a foul on Younis at a set piece. The Bonnyrigg number 9 calmly rolled the ball into the bottom corner, after sending Henderson the wrong way.

Still Bonnyrigg attacked, but Grant Lee made a smart change to his on field personnel, moving Yianni Spyrakis into central defence, Brendan Hooper to right back and the energetic Brayden Sorge into midfield.

Sorge was a critical outlet on the right and he raced onto a loose ball only to be fouled by Chris Tadrosse. The crowed wanted red, but Griffiths-Jones only produced yellow.

Olympic looked sharp on the break with Sorge, Soeda and Shirai proving to be worthy outlets, while Hatzimouratis worked his socks off up front.

Three minutes remained when Hooper headed inches wide from an inswinging corner. Then, a minute later, Olympic looked like they had won the game.

Hatzimouratis weaved his way into a good shooting position in the area, but Gobbo reacted to make a sharp save. When the ball bounced around and came back to Harris Gaitatzis, he lashed a spectacular looking volley only a yard over with Gobbo beaten.

And so the game went into extra time.

The trinity of Sorge, Soeda and Shirai prompted and probed and Olympic by far had the better run of the play in the extra half hour.

Henderson saved really well from Canak in the 100′ minute, plunging low to his left to touch a rasping shot around the post.

Then, with only two minutes to go, Bonnyrigg had the chance of the match. Peterson was away on the right and when his cross evaded Sorge, it fell at the back post for Canak. The Bonnyrigg number 8 looked like he’d thrashed the White Eagles into the grand final, but his shot rocketed into Younis and away to safety, with Henderson beaten.

It was to cost them dearly.