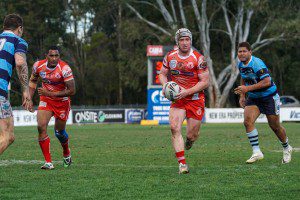 Go, Sammy: Eagles hooker Sam Hoare is up for an award this Wednesday night.

It means The Eagles have earned the week off and will play either Mounties or the Peninsula in a fortnight’s time for a spot in the 2014 Sydney Shield Grand Final.

The 2012 Claytons Cup winning club travelled to Ringrose Park to play Wentworthville on their home soil. In previous games between the two clubs, they had each won one game, so it always going to be a close tussle.

The Eagles came out hard and fast and were rewarded with an early try when Wayde Dunley put a little kick behind the line on the third play for flying fullback Sean Connor to pounce on the ball for a try.

But it was that man Sean Connor again who made a break from a kick return and Chris Standing was in support.

With Connor converting, the visitors raced to a

10 – nil lead after just 15 minutes into the first half of the semi final clash.

Wenty hit back with a converted try, but again the Eagles responded with a try to Philipo Sauvao and Connor missed the conversion for a score of 14-6.

A couple of mistakes made by the Eagles saw Wenty capitalize with another converted try to be within two points of the Eagles score, at 14-12.

The Eagles pulled of a fantastic set play for Fusi Toutai to run away for a try in the corner and a great conversion from Sean Connor stretched the lead to 20-12.

And when Fusi Toutai intercepted a Wentworthville pass and sprinted 60 meters to score right on the stroke of half time the visitors all of a sudden had a handy lead of 26-12.

Wentworthville posted the first points of the second half with a converted try at the 10 minute mark, but the Eagles dominated possession for the next 10 minutes.

Wenty’s defence cracked when big PJ Hunt barged over for a try and Connor converted for the score to go to 32-18.

Wenty hit back with a try and Wenty’s goal kicker was kicking them from everywhere to close the gap at 32-24.

A penalty in front of the posts with eight minutes remaining saw the Eagles take the easy two points on offer and wind  down the clock for the score to go to 34-24.

Wentworthville, with a minute remaining scored a converted try, but it was all too late as the Eagles won 34-30 in a very entertaining game of footy

“Our club has done an amazing job to get such a competitive team on the field and the players have responded playing with plenty of pride and passion,’’ Eagles coach Gary Potts said.

“It got them over the line in such a tough game; we are so proud of the club’s achievements thus far, but our goal is that premiership.”

Best for the Eagles were: Sean Connor, Jimmy Laulilii, and Fusi Toutai.

In other good news for the club, Sam Hoare, a long serving East Campbelltown Eagles player in his seventh season, has been nominated for the “Best and Fairest” Sydney Shield player of the year. The awards will be announced at a presentation  of the NSW Rugy League Brad Fittler Medal this Wednesday night.

White Eagles lose in penalty shootout
On your bikes, boys and girls