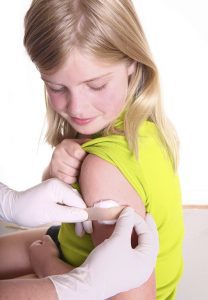 The opposition will introduce legislation this week that plugs a loophole that currently allows such centres.

“As the father of two boys myself, I am a firm supporter of immunisation,” Mr Warren said.

“We have to find ways to increase vaccination rates and if it requires plugging loopholes allowing anti-vaccination centres, then we have a responsibility to do so.

“We need to be encouraging vaccinations not discouraging them.

“Vaccinations are the only way to protect against serious diseases like polio, mumps, whooping cough, meningococcal, diphtheria and tetanus,’’ Mr Warren said.

“We make no apologies for taking these tough steps to protect children and the overall community.”

“A lot of people nowadays have not seen the results of those diseases that used to be around that vaccinations have helped prevent,” Ms Kilgour said.

“It really is a duty of care to ensure that all children are vaccinated against these terrible diseases.”

As part of the legislation, the Opposition will remove the so-called “conscientious objector clause”.

However, it will retain the specialist provision for children who cannot be vaccinated due to a medical condition such as a specialised cancer treatment.

Mr Greg Warren said this was a sensible approach as it separated the anti-vaxxers from children who were undergoing cancer treatment.

He said there have been recent reports of patients reporting to NSW hospitals with vaccine preventable diseases like whooping cough and measles. 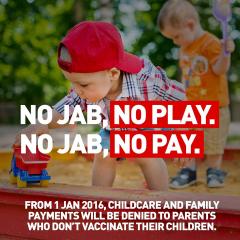 Governments are getting tough with anti-vax parents.

More than 40 years experience in the news media, most of them as editor of local newspapers across the Sydney metro area, but a few years working as a sub-editor with the metros. Lots of awards, both as a reporter and editor, but says he values just as much Community Service Awards from Campbelltown City Council in 2004 and 2016. Took a voluntary redundancy in 2014 from Fairfax Community Newspapers after 21 years there. Loves the digital world, because ''there's no question it's the future''. Eric promises his hard hitting but fair approach won't change when he reports the news via cyber space.
View all posts by Eric Kontos
Kangaroos tame Lions as big wet spoils opening round
Mawson Park to host great Easter egg hunt this Saturday