One out of one: The victorious Campbelltown City Kangaroos after their round 1 win over the Lions in Mittagong on Saturday night. Coach Liam Fulton is second from left.

The wet weather played havoc with the opening round of the Group 6 rugby league competition, with only the Mittagong Lions and Campbelltown City Kangaroos match going ahead on Saturday night.

The other three local derbies, Camden v Narellan, The Oaks v Oakdale and Picton v Thirlmere have been rescheduled to be played on the weekend of May 6-7.

The lone match in Mittagong was a close affair, with the lads from Campbelltown taming the Lions in a narrow 26-24 win and two valuable premiership points.

It means the Liam Fulton coach side will head to Picton full of confidence this weekend to take on the Magpies in round two.

A well worked try by the Karam brothers had City in control at 12-4, before a soft try to Mittagong’s Jake Ngaia saw the score narrow to 12-8 just before the halftime break.

But Russell probed the Mittagong marker defence and forced his way into the Lions backfield.

A 40 metre burst was rewarded on the next play with City’s Chris Williamson crossing for a 16-8 halftime lead.

Spurred on by a parochial local crowd, the Lions crashed over to narrow the score to 16-14 early in the second stanza.

Back to back tries by classy City backs Jett Karam and Christian Tulua placed the Kangaroos in a commanding position with 20 minutes left to play.

With the score at 26-14 in their favour, the visitors were cruising to what looked like certain victory.

Clever five-eighth Jhy Karam appeared to have scored a certain try under the posts, after having the ball raked from him.

But it was ruled a no try, keeping the home side in the contest.

And the Lions did take advantage of the no try ruling by scoring two of their own to be within reach of victory at 26-24.

More by good luck than management, the Kangaroos managed to hang on to give new coach Liam Fulton his first victory as well as bragging rights over the inaugural Corkery-Andrews Cup.

Fulton praised his team’s will to win after a severely hampered preparation and physicality in the face of a very direct Mittagong team.

New Mittagong coach Dan Beardshaw had his charges primed and looks to have the depth to mount a serious top 5 campaign in 2017.

Both were present to award City captain Kurt Austin the trophy, which will again be played for in mid-June.

Camden vs The Oaks; 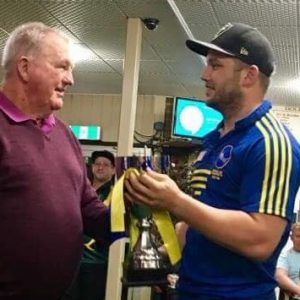