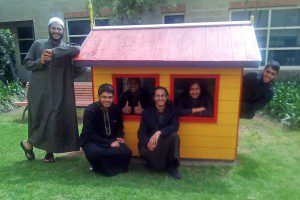 Toy drive for a good cause: some of the UWS Muslim students who took part in the charity fundraiser recently for Kids of Macarthur Health Foundation.

The Muslim Student Association at the UWS Macarthur campus recently hosted a toy drive for sick children at Campbelltown Hospital.

But the Muslim students, many of whom are studying medicine at UWS, did not stop at handing over the cheque for $500 to the Kids of Macarthur Health Foundation.

To follow-up on this donation, the Muslim Student Association sought permission to visit Campbelltown Hospital and present a gift to every child in hospital that day.

Children of friends and family visiting on the day didn’t miss out and were also presented with toys.

“They were a great bunch of students and the children loved seeing them in their traditional dress and especially loved the toys they were given,” said Kids of Macarthur Health Foundation representative Denise McGrath.

“A lot of the MSA representatives are currently studying medical science, so they are very interested in the health and welfare issues surrounding local children.”

At the end of a very busy day the MSA members also volunteered to help the various units within the hospital and Kids of Macarthur Health Foundation in any way possible in the future.

Their aim is to remain engaged and continue to help sick children in the region.

The Kids of Macarthur Health Foundation was established to raise funds to purchase paediatric medical equipment for Campbelltown and Camden Hospitals and community health centres across Macarthur.

For further enquiries go to: www.kidsofmacarthur.com.au