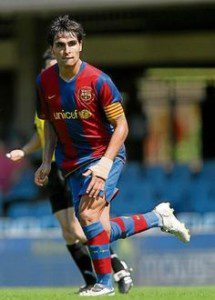 Western Sydney Wanderers have secured the signature of Spaniard Dimas Delgado on a one year deal.

The 32-year-old holding midfielder joins countryman Andreu at the club with a well credentialed playing history in Spain’s Segunda División.

Starting his career at lower league side Gramenet before signing for Barcelona, Dimas spent one season in La Liga with Numancia.

During the past five years he has earned  more than 200 caps playing for Numancia, Cartagena and Recreativo Huelva in both leagues.

The 180 centimetre tall midfielder will arrive this Friday before linking up with the team on Monday as the Wanderers prepare to host Brisbane Roar in the FFA Cup Round of 32 at Pepper Stadium.

Wanderers CEO John Tsatsimas said securing Dimas showed that the club is committed to being an immediate threat in the league this season.

“We have had a very big off season in terms of our recruitment, we believe that these new additions will have us in a very strong position leading into the coming season,” Tsatsimas said.

“Dimas has played in a top league in Europe his whole career and we know the calibre of player he is and that he can add another dimension to our midfield.

“We look forward to welcoming Dimas to our club and putting the final pieces together for a very strong Hyundai A-League season.”

Dimas said he was looking forward to a great season with the Wanderers.

“I am very happy with the opportunity and I look forward to getting started with the Wanderers,” he said.

“It will be a very nice experience for me and my family, I’m going to a great country like Australia and a great city and I will do my best to adapt to the city and the club as quickly as possible.

“I wish we have a great season full of success.”

The Wanderers are next in action this Friday night (August 7) against Central Coast Mariners at C.ex Coffs International Stadium.