Classic race: the 2014 Miracle Mile at Tabcorp Menangle will once again be harness racing at its best.
Pictures: Sean Cunningham

All roads will lead to Menangle Park this Saturday as the Carnival of Miracles reaches its climax with the running of the 2014 Miracle Mile, reports SEAN CUNNINGHAM:

Several thousand racegoers are expected to descend on Tabcorp Park Menangle, which is set to host one of harness racing’s premier events.

Raced over 1609 metres at the Southern Hemisphere’s most prestigious harness racing track, the big event will feature a 10-race card, which will include some of the best pacers in Australasia.

Trainer/driver, Tasmanian James Rattray, hopes to repeat the feat and defend the title, partnered with the seven-year-old gelding. 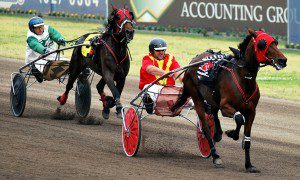 Beautide should start favourite for the big race but is not guaranteed to have things all his own way in the eight-strong field.

Drawing gate three in the barrier draw, Beautide and his reinsman Rattray will be looking for some cover and a smooth run just in behind some established speed machines.

Lauren Panella, the sole female driver in this year’s race, will be hoping to guide Suave Stuey Lombo to victory.

Guaranteed has youth on his side, being the youngest in the race at five years old.

Last year’s Miracle Mile runner-up, Christen Me, will try to go one better this year and For A Reason, which finished third in the 2013 Miracle Mile, will be vying for the first prize under the guidance of the talented Luke McCarthy, who is based at Cobbitty.

The full field includes: Easy On The Eye, Avonnova, Beautide, Christen Me, For A Reason, Guaranteed, Suave Stuey Lombo, Terror To Love and emergencies Bettor Bet Black and Chariot King.

The race record has tumbled since the MIracle Mile was first run in 1967, when New Zealand horse Robin Dundee romped home to cross the line first in a flat 1m.59s and it would be no surprise to witness this year’s winner shaving some time off the existing record on Saturday night if the right conditions prevail.

Admission prices are $20 for an adult, $10 concession card holders and children aged 16 and under will be admitted to the revamped circuit for free.

Gates will open at 5pm at the nation’s premier harness racing venue, which is located at Racecourse Avenue, Menangle Park.

As an added bonus, everyone who attends on Saturday will be able to enter a draw to win a trip for two to Las Vegas.

Racegoers who are dressed in red and white will also be in with a chance to win some special prizes.

More than 40 years experience in the news media, most of them as editor of local newspapers across the Sydney metro area, but a few years working as a sub-editor with the metros. Lots of awards, both as a reporter and editor, but says he values just as much Community Service Awards from Campbelltown City Council in 2004 and 2016. Took a voluntary redundancy in 2014 from Fairfax Community Newspapers after 21 years there. Loves the digital world, because ''there's no question it's the future''. Eric promises his hard hitting but fair approach won't change when he reports the news via cyber space.
View all posts by Eric Kontos
Express train service push just the start, says Hadid
Lacklustre Pirates keep feisty Sharks at bay