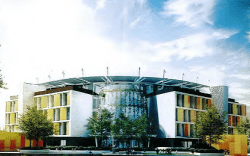 This how Panjo, the building on the corner of Campbelltown Road and Rose Payten Drive would like on completion as a child care centre, indoor recreational facility and serviced apartments.

A giant white elephant at the gateway to Campbelltown has been stirred back to life – but not everybody is happy.

Known locally as Panjo, the six storey building on the corner of Campbelltown Road and Rose Payten Drive will be converted into a massive 172 place child care centre, 139 serviced apartments and an indoor recreational facility.

When the plan went on public exhibition, submissions from the public included comments like “the building looks hideous and is out of place’’, and “the building on the site was not completed in accordance with the approved design and is an embarrassing monstrosity.’’

But council says this application “proposes to substantially improve the appearance of the building, by adding coloured metal panels and glass louvres to replace the stark metal sheeting, and constructing roof-mounted awning elements to harmonise the various components of the building.

“The proposed development would be a significant improvement on the existing state of the building.’’

Cliff Barry, owner of The Hermitage motel and restaurant next door, was a strong supporter of the Panjo development, which was never finished because the project ran out of money.

But Mr Barry is not sure that what council has now approved is the right thing for the gateway to Campbelltown.

“I am more disappointed for Campbelltown than anything because the last thing it needs at its gateway is an enormous block of flats,’’ Mr Barry said.

“This should be Campbelltown’s iconic building, the first thing first time visitors would see, so in that respect it’s a lost opportunity to do something really special in a really special spot,’’ he said.

“In terms of use, council should have tried to get something like a private hospital for Panjo, or maybe a youth centre.

“It would even have made a really nice council chamber for Campbelltown Council,’’ Mr Barry said. 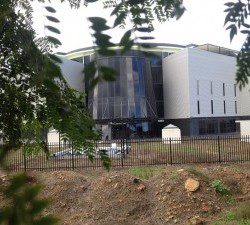 This is what the building looks like now from Campbelltown Road.

Although at first approved as a bulky goods facility 10 years ago, the people behind it decided to change it to a unique centre for young people, providing space for music and dance classes, as well as recreational activities such as putt-putt.

That’s when the name Panjo was born.

Mr Barry thought it was a brilliant idea and fully supported the developers, however he is not obviously a fan of what has been approved now.

“Look, I will survive but I am just disappointed for Campbelltown,’’ he says.

Mayor Paul Lake agrees with Mr Barry about one thing: Panjo would have made perfect sense as Campbelltown Council chambers.

“I wish we could have put the council chambers there, it also offers huge amount of parking, but it’s the wrong zoning,’’ Councillor Lake said.

“If we had tried to rezone it so council could buy it for its chambers we would have been crucified.

“Look, I think it’s good that we are finally going to put something in there so it’s not just sitting there doing nothing.

“In regard to the apartments, the fact is that we are short of such accommodation much of the time.

“It’s because of what’s happening in Campbelltown, we are growing so we are getting more and more events and we have shortages of accommodation.

“Once this is done it will improve this situation – in fact it will mean that we will also for the first time go close to being able to offer to host a local government conference.

“I do understand the comments about the look of the building because of its iconic location at the gateway to the town but this plans means improving the design of the building,’’ Cr Lake said. 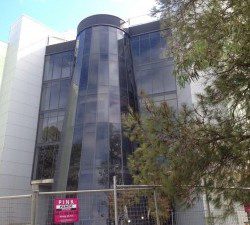 The building’s Grange Road side.

Councillor Darcy Lound, who commended the proposal to council last Tuesday night, said he was just glad the site would finally be cleaned up.

“It is good that we are finally doing something with this building, it will be an improvement on what it has been like for years now,’’ Cr Lound told the South West Voice.

“I am just happy that we are moving forward with this development, because it means good things for this area, with the child care centre and the accommodation; it will also mean employment, jobs for local people.

“That’s the reason I supported it, at the moment it’s just sitting there, it’s an eyesore and the new design will mean it will look OK.’’

The refurbishment is estimated to cost more than $17 million.

The proposed childcare centre would be located on the ground floor of the existing building (which is beneath finished ground level from the perspective of Campbelltown Road and Rose Payten Drive). Its proposed hours of operation are 6am to 7pm Monday to Friday, and it would employ 29 staff.

The proposed recreational facility would also be located on the ground floor of the building, and would encompass the existing ground floor pool and change rooms.

The five upper floors of the building would contain the proposed serviced apartments, which would employ 14 staff.

According to the council report, a landscape plan has been prepared by a landscape architect, incorporating mostly species from the Campbelltown Native Gardening Guide.

The application provides a significant amount of landscaping, in particular adjacent to the site’s property boundaries with Campbelltown Road, Rose Payten Drive and Grange Road.

A significant amount of landscaping is also proposed within the communal open space area of the serviced apartments and the outdoor play areas of the childcare centre.

More than 40 years experience in the news media, most of them as editor of local newspapers across the Sydney metro area, but a few years working as a sub-editor with the metros. Lots of awards, both as a reporter and editor, but says he values just as much Community Service Awards from Campbelltown City Council in 2004 and 2016. Took a voluntary redundancy in 2014 from Fairfax Community Newspapers after 21 years there. Loves the digital world, because ''there's no question it's the future''. Eric promises his hard hitting but fair approach won't change when he reports the news via cyber space.
View all posts by Eric Kontos
Big wet causes havoc in the south west
Mt Gilead small step forward but Appin Road still a worry

One Response to Panjo gets new lease of life as a huge child care centre, 139 serviced apartments