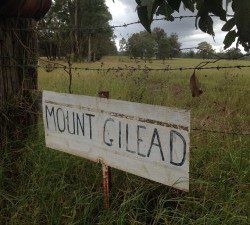 Campbelltown Council has moved the Mt Gilead housing plan a step closer to reality by agreeing to place it on public exhibition.

Up to 1,700 houses will be built when the development with the Appin Road frontage finally gets the green light, providing a Campbelltown population increase of around 5,000 people.

Some councillors were opposed to placing it on public exhibition because they believe Appin Road should be widened first before a house is built on Mt Gilead.

Councillor Borg, who has been campaigning for improvements to Appin Road for close to 20 years, said he just could not bring himself to support the development at this stage.

“Until they fix Appin Road I just cannot support this,’’ he told council.

But a majority of councillors voted to proceed, as well as deciding to also write to the Minister for Planning and Minister for Roads Maritime and Freight requesting the state government outline its commitment to the upgrade of Appin Road and other infrastructure relevant to the Mt Gilead proposal.

The council also wants the minister to provide a timetable for the funded delivery of the upgrade of Appin Road and other infrastructure requirements created by the proposal.

♦ In another major decision last Tuesday night, Campbelltown Council voted to allocate $300,000 from budget savings in the current financial year to fund improvements to its controversial animal care facility.

Council also approved the allocation of $385,000 for inclusion in its 2015-2016 Budget to fund “best practice’’ improvements to the Rose Street facility.

Council will now invite and consider tenders for the future operation of the animal are facility for three years once the improvement works have been completed.

It was also decided that a strategic prevention program be developed as a high priority which aims to effectively engage the community to minimise future companion animal accommodation demands on the Animal Care Facility.

And council wants the Animal Care Facility website to be updated daily.

More than 40 years experience in the news media, most of them as editor of local newspapers across the Sydney metro area, but a few years working as a sub-editor with the metros. Lots of awards, both as a reporter and editor, but says he values just as much Community Service Awards from Campbelltown City Council in 2004 and 2016. Took a voluntary redundancy in 2014 from Fairfax Community Newspapers after 21 years there. Loves the digital world, because ''there's no question it's the future''. Eric promises his hard hitting but fair approach won't change when he reports the news via cyber space.
View all posts by Eric Kontos
Panjo gets new lease of life as a huge child care centre, 139 serviced apartments
Qatar to follow in China’s footsteps and use our stadium