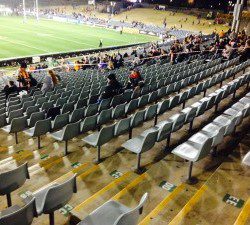 Hot on the heels of China, Qatar will be the second national soccer team to use Campbelltown as their pre tournament camp venue in less than six months.

In what is another coup for Campbelltown and the south west of Sydney, the tournament Qatar will be training for – the FIFA Under 20 World Cup – isn’t even being staged in Australia.

It is being hosted by New Zealand between May 30 and June 20.

Councillor Darcy Lound, a football administrator – he’s the president of the Macarthur Rams football club – welcomed the Qatari decision to use Campbelltown.

“This is great news and it comes just after China did the same thing during the Asian Cup won by Australia,’’ he said.

Campbelltown Sports Stadium hosted the Chinese National Football team in a pre competition training camp in the lead up to the AFC Asian Cup from December 29, 2014 to January 6, 2015.

The stadium also hosted the Young Socceroos in a training camp in April 2014.

The Qatar team will use the stadium for training sessions and two friendly matches against the Young Socceroos, who have not qualified for the tournament.

At this stage the team officials have indicated that these matches will be closed to the public, says a report presented to council last Tuesday.

It is not yet known if there will be any training session open to the community.

“A further update will be provided to council once details are finalised,’’ the report said.

The team will be in Campbelltown during May 15-22 prior to departing for New Zealand.

The Qatar contingent, who will be staying at Rydges, Campbelltown, will be made up of approximately 40 people including players, coaching and medical staff and officials.

“The training camp will contribute positively to the local economy through accommodation, transport, hospitality and entertainment spending,’’ the report said.

“Hosting the Qatar team will provide a further opportunity to promote the Macarthur region and to showcase the stadium’s highly regarded playing surface to other international teams which may result in further team visits in the future.’’

More than 40 years experience in the news media, most of them as editor of local newspapers across the Sydney metro area, but a few years working as a sub-editor with the metros. Lots of awards, both as a reporter and editor, but says he values just as much Community Service Awards from Campbelltown City Council in 2004 and 2016. Took a voluntary redundancy in 2014 from Fairfax Community Newspapers after 21 years there. Loves the digital world, because ''there's no question it's the future''. Eric promises his hard hitting but fair approach won't change when he reports the news via cyber space.
View all posts by Eric Kontos
Mt Gilead small step forward but Appin Road still a worry
United will aim to tame Tigers dynamo Blake Powell