Eric Kontos on Wednesday, 1 October, 2014 in The Kontos Report • 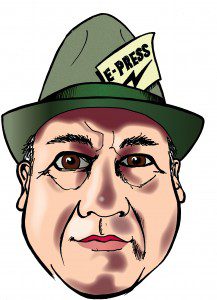 I WOULD love to know who the people are on this Planning and Assessment Commission which has given concept approval to one of the two intermodal plans for Moorebank.

They obviously don’t live in Wattle Grove or Moorebank or Hammondville or Chipping Norton, because if they did they would know how wrong their decision is.

But before going any further, let me say that I take my hat off to the member for Menai, who gave it to the commission with both barrels.

Melanie Gibbons did a rare thing for a politician yesterday: she took a risk, and I think it’s for the simple reason that she cares for the people she represents.

These are just some of her responses in the press release sent out to the media:

“I am shocked and angry that the PAC has listened to big business instead of the local residents who are the ones who will bear the brunt of this facility. This is an ignorant decision,” Ms Gibbons said.

“The PAC seems to have been blinded by the benefits to the freight industry – but it will have a disastrous impact on the local residents.

“I know of no other private business that will risk the health of so many people.

“I feel betrayed that the PAC has ignored the detrimental effect this will have on residents.’’

Strong stuff but will it be enough to stop any intermodal being built in Moorebank?

Not unless many more of the affected residents join the few who have been fighting this all the way.

Human nature being what it is, the authorities are bound to take such signs of apathy as implied support for this massive project.

If the roar of the trucks won’t wake you up, the squeal of the freight trains certainly will – 24 hours a day, seven days a week.

Down south in Campbelltown, the battle – as well as plenty of apathy – is over the redevelopment of the Housing Commission suburb of Airds.

All the approvals have been given for the makeover which will turn Airds into a suburb where 70 per cent of homes are privately owned and the rest reserved for Housing Commission tenants.

This makeover has already occurred in Minto, which has been a huge success, and seen the Lazarus-like reopening of its shopping centre after years of neglect and inevitable decay.

Next on the list is another Housing Commission suburb, Claymore.

This is all wonderful news for Campbelltown and will restore the demographic balance the town enjoyed before it became a dumping ground for the Housing Commission in the 1970s and 1980s.

It is fair to say that Campbelltown ended up with its fair share of social problems because of this imbalance, and it is only in the past 10 years that things have started to turn around.

But back to Airds, where some people will try almost anything to stop or delay the work.

I am not even sure who these people are, but what is important is that the great bulk of the people of Campbelltown strongly supported what happened at Minto, strongly support the Airds redevelopment, and will not doubt also back the Claymore makeover.

I am sure the spoilers are few and far between, but as usual they get lots of media space, goodness knows how, to propagate their rubbish.

It’s pleasing to see Campbelltown Council standing strong in the face of such negative campaigns. 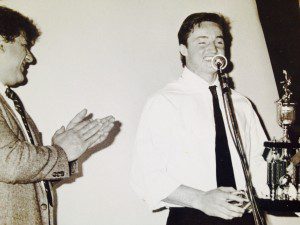 Welcome back JT: The new Wests Tigers Jason Taylor, right, in his Magpie days in Campbelltown, presenting a sport star award around 1991. To his left is the author, at the time the editor of the Campbelltown Chronicle.

It’s grand final week and with the Bunnies, my second team, sure to win its first premiership in 43 years, rugby league will surely be the winner.

But for us Wests Tigers supporters the good news came in the middle of the week when the club announced that the former Magpies halfback Jason Taylor would be the coach for the next three years.

Since he was unceremoniously dumped from South Sydney five years ago, I have watched JT (the original one, before Jonathan Thurston) work in the media as an analyst and then as assistant coach at the Roosters more recently.

Reading his analysis of teams’ weaknesses and strengths I was very impressed and remember saying to someone, JT reminds me of Phil Gould in his understanding of the game.

JT attended St Gregorys College, Campbelltown after doing his early schooling at Ashcroft up in Liverpool, so he’s a south west boy through and through.

I actually got to know him very well in his Magpie days and remember him as a very nice young man. So nice my daughter Tess, aged 11 or 12 maybe, insisted I organize a get together so she could meet her hero, which I did in the old Chronicle office in Queen Street (I was editor then) and Jason was really obligingly.

Seeing him on TV he stills looks like a good bloke, and I wish him all the best at the Tigers for the next three years.

But in the meantime, go the Bunnies.