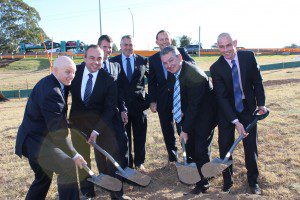 The Commonwealth and NSW Governments have joined forces to pay for the upgrade of the much maligned Narellan Road to six lanes from Camden Valley Way at Narellan to Blaxland Road at Campbelltown.

In a joint statement, they said said the 6.8 kilometre upgrade was a much-needed investment to improve infrastructure in the Macarthur area and throughout the south west Sydney growth corridor.

”When complete, motorists will spend less time in traffic jams and more time with their families, businesses will get their goods and services to market faster and everyone will benefit from safer roads,” the statement said.

”During construction this project is expected to generate 250 jobs and benefit local businesses.  The upgrade is part of both governments’ plan to build a stronger and more prosperous Western Sydney by investing in major infrastructure that will transform the region’s economy.

”Western Sydney is already Australia’s third-largest economy with the region expected to grow from two to three million people in the next 20 years.”

Stage One of the upgrade begins with 1.6 kilometres of Narellan Road between the Hume Motorway and the access road to the Western Sydney Institute and University of Western Sydney and includes:

The Commonwealth Government has provided $53 million towards the upgrade in addition to the NSW Government $61 million commitment.

“I was pleased to join the Prime Minister, Federal Treasurer, Premier Baird and my parliamentary colleagues Jai Rowell and Chris Patterson as the first sod of this project was turned,” Mr Doyle said.

“The 1.6 kilometre upgrade first stage is a much-needed investment and will improve transport infrastructure in the Macarthur and will provide additional jobs to benefit local businesses and families.

“I am proud to be part of a Government that’s delivering on its election commitments.”

More than 40 years experience in the news media, most of them as editor of local newspapers across the Sydney metro area, but a few years working as a sub-editor with the metros. Lots of awards, both as a reporter and editor, but says he values just as much Community Service Awards from Campbelltown City Council in 2004 and 2016. Took a voluntary redundancy in 2014 from Fairfax Community Newspapers after 21 years there. Loves the digital world, because ''there's no question it's the future''. Eric promises his hard hitting but fair approach won't change when he reports the news via cyber space.
View all posts by Eric Kontos
Koalas get a break in new Airds
Honours for local volunteers