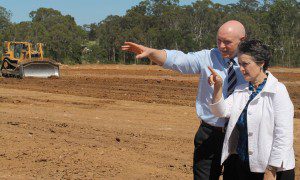 Redevelopment: Work is under way as part of the Airds renewal project.

It’s not officially a ”koala corridor” but an area where they are known to move through will get bigger protection as the Airds Bradbury renewal project unfolds.

According to the State Member for Campbelltown, Bryan Doyle, an UrbanGrowth NSW proposal is a ”win” for the people of Campbelltown.

“I spoke with UrbanGrowth NSW and I am pleased that an amended proposal to the Voluntary Planning Agreement is now being submitted to Campbelltown Council for its consideration,” he said.

As part of this new proposal, the proposed Baden-Powell Reserve will increase in size by 80% and will retain the proposed landscaping and community improvements such as foot paths, tree planting and play equipment.

“UrbanGrowth NSW and NSW Land and Housing Corporation have worked hard to accommodate the small koala habitat known to be in the vicinity of the project,” Mr Doyle said.

“Local koala experts have confirmed with UrbanGrowth NSW that a small population of koalas does inhabit the Georges River Reserve, however, their irregular movements through the suburb do not constitute what is known as a koala corridor.

“The Airds-Bradbury renewal project represents one of the largest public infrastructure spends in our region. When finished it will result in a thriving community at the heart of Campbelltown. I support the efforts made by UrbanGrowth NSW and NSW Land and Housing Corporation in listening to community concerns,” Mr Doyle said.

More than 40 years experience in the news media, most of them as editor of local newspapers across the Sydney metro area, but a few years working as a sub-editor with the metros. Lots of awards, both as a reporter and editor, but says he values just as much Community Service Awards from Campbelltown City Council in 2004 and 2016. Took a voluntary redundancy in 2014 from Fairfax Community Newspapers after 21 years there. Loves the digital world, because ''there's no question it's the future''. Eric promises his hard hitting but fair approach won't change when he reports the news via cyber space.
View all posts by Eric Kontos
Gallipoli tour deadline near
Money finally starts to pour in for Narellan Road widening