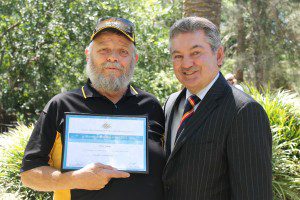 Volunteers are a special feature of Australian culture and the Macarthur region is no different.

Where Macarthur is different is in singling out and honouring  the local volunteers who keep the engines of its community life ticking over.

And that is pretty much what the Federal Member for Macarthur, Russell Matheson, said last week in launching the 2014 Volunteer Awards for Macarthur.

Mr Matheson hosts the awards in December each year to recognise the contribution of local volunteers who are dedicated to helping others in their community. He said volunteers played a huge role in schools, sporting clubs, businesses, community organisations, charities and families across our community.

“Our local volunteers donate so much of their own time, energy and enthusiasm into helping others across a range of services including welfare, sport, disability, emergency services and the environment,” Mr Matheson said.

“These awards get bigger each year and are a fantastic opportunity for us to recognise our hard working volunteers and thank them for what they do to make Macarthur such a great place to live.”

This year awards are available in 10 categories:

• MP’s Volunteer of the Year;

• Junior Volunteer Award (17 and under);

Mr Matheson said the nomination process was very easy to do and encouraged local families, sports groups and not-for-profit organisations to nominate a deserving volunteer.

“We have thousands of worthy volunteers here in Macarthur, so I hope to see many nomination forms come into my office over the next three months,” Mr Matheson said.

“I look forward to meeting all of our nominated volunteers at a special awards ceremony which will be held on International Volunteer Day on December 5 at the Campbelltown Arts Centre.”

Nominations will close on November 1, 2014 at 5pm. To nominate a volunteer you know contact Mr Matheson’s office for a nomination form by calling 46557600 or email russell.matheson.mp@aph.gov.au

Mr Matheson with all of the category winners from last year.

More than 40 years experience in the news media, most of them as editor of local newspapers across the Sydney metro area, but a few years working as a sub-editor with the metros. Lots of awards, both as a reporter and editor, but says he values just as much Community Service Awards from Campbelltown City Council in 2004 and 2016. Took a voluntary redundancy in 2014 from Fairfax Community Newspapers after 21 years there. Loves the digital world, because ''there's no question it's the future''. Eric promises his hard hitting but fair approach won't change when he reports the news via cyber space.
View all posts by Eric Kontos
Money finally starts to pour in for Narellan Road widening
Cash boost for Appin and Airds men’s shed projects