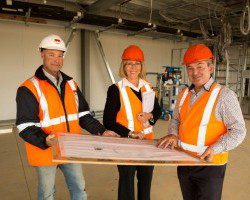 Produce company OneHarvest has secured a $1.775 million grant under the Federal Government’s Manufacturing Transition Program to advance their manufacturing capability.

It will mean an extra 100 local jobs in the next couple of years.

Announcing the investment, the Federal Member for Macarthur, Russell Matheson, said the Federal Government’s Manufacturing Transition Program was part of the commitment to ensuring a secure future for manufacturing in Australia by focusing on areas of competitive strength.

“The $1.775 million Manufacturing Transition Program grant is part of a $7 million project that will be housed adjacent to the $34 million freshcut salad facility that is currently under construction in Smeaton Grange.

“This is great news for Macarthur, as it will create around 100 new jobs when both plants are fully operational by June 2017, and has provided employment for a variety of tradespeople during the construction and fit out phase, with 297 tradespeople inducted on the site,” Mr Matheson said.

OneHarvest are developing an innovative processing of salads out of a new Sydney processing facility at Smeaton Grange.

The process will dramatically increase the quality and safety of salads without the detrimental effect of heat or chemical preservatives traditionally used in production.

Managing Director of OneHarvest, Sam Robson, said that once the plant was operational, the project would involve the launch of an entirely new style of salad products to the Australian market, with a range of exciting and tasty positive attributes unlike anything seen before.

OneHarvest (which comprises businesses Harvest FreshCuts, Vegco, Harvest FreshFruits and Harvest Farms) is a successful, third generation, 100 per cent Australian owned produce business with operations in freshcut salads and beetroot as well as in fruits including Calypso mangoes and avocadoes.

Further information on the Manufacturing Transition Program can be found at http://www.business.gov.au/MTP.

More than 40 years experience in the news media, most of them as editor of local newspapers across the Sydney metro area, but a few years working as a sub-editor with the metros. Lots of awards, both as a reporter and editor, but says he values just as much Community Service Awards from Campbelltown City Council in 2004 and 2016. Took a voluntary redundancy in 2014 from Fairfax Community Newspapers after 21 years there. Loves the digital world, because ''there's no question it's the future''. Eric promises his hard hitting but fair approach won't change when he reports the news via cyber space.
View all posts by Eric Kontos
PAC panel member steps down on Moorebank recycling bid
Hubris alert for booming Liverpool