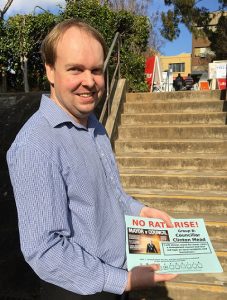 Vote for me if you want a back to basics council: Councillor Clinton Mead handing out how to vote forms at the Queen Street pre-poll centre yesterday.

If the Liberal Democrats had their way, “big government’’ would be kicked out on its backside.

Clinton Mead, the flag bearer of the Liberal Democrats in Campbelltown, is seeking re-election on such unthinkable notions as councils going back to basics.

Back to roads, rates and rubbish.

“We should go back to our core things, make sure the roads are fixed and the parks are maintained,’’ Cr Mead says.

Councils have succumbed to the “big government’’ disease, he says, dabbling in things they should not be involved in, such as child care, tourism information offices and arts centres.

He says if Campbelltown Council closed the tourism office, got out of the child care business and made the art centre pay for itself it could save ratepayers close to $5 million a year.

“That’s just a quick calculation of three things and you can see why council needs to put up the rates to catch up with infrastructure maintenance and renewal,’’ Cr Mead says.

“Businesses out there in Campbelltown keep their costs down below inflation, they have to, and so should council.

“The reason I am running for council, why I want to get back on is because I want to hold council to account, hold their budget to account,’’ he says.

Clinton Mead was once a member of the now defunct Australian Democrats party; the one founded by the late Senator Don Chipp to “keep the bastards honest’’.

When that party closed shop for good, young Clinton Mead almost immediately found a new home among the Liberal Democrats.

He describes their philosophy as: we think you spend your own money better than the government.

“We do believe you need a welfare net for some people, but what we don’t need is governments running businesses, running things which people could decide for themselves,’’ Cr Mead says.

“We don’t even believe we should have government schools, so people say how will poor people get an education.

“We say the same way they get food – the government doesn’t run farms but people in Australia generally have food, because we have welfare that helps people by giving them money to buy food.

“Same as schools, you’d give poor people a voucher to send their children to school.

“All these things can be done without government bureaucracy, it gives people choice and you can do the same with health.

“When you get rid of the bureaucracy, when you have competition, consumer choice, prices go down.

“If you’re wealthy you can pay for your own health care, or education.

“But if you’re down on your luck we’ll provide a voucher for you.

“Why is government paying for health care for millionaires,’’ Cr Mead says.

Politics is a numbers game and somehow Cr Mead found himself wearing the mayoral robes a year after getting elected to Campbelltown Council in September 2012.

He railed against the big eight per cent rate hike and other issues but he was in the minority for most of those four years on council, including when he was mayor.

Sticking to his Liberal Democrat principles resulted in many humiliating 14-1 defeats on the floor of the council chamber.

There’s no doubt some of the other councillors thought he was a damn fool. 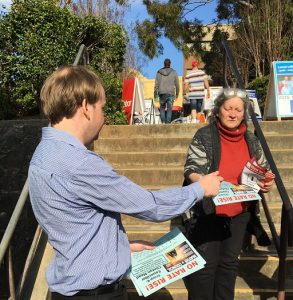 But Clinton Mead doesn’t see it that way.

“If you go into a business saying, my aim is to make money, you’re not going to do very well,’’ he says.

“You need a plan, a direction, some sort of structure of what you are trying to do, and that’s what ideology gives you.

“The independents who get on council without an ideology or a plan, think, what can I do?

“Well what I can do is help people by spending ratepayers’ money, and that’s all they do.

Cr Mead says going into politics he would have worried if he found himself voting with everyone else.

“I went in there with a particular idea of who I was and sometimes I get more concerned when people vote with me,’’ he says.

“So when I get smashed 14-1 it’s a pleasant reminder that I am fighting for something; I haven’t become just another politician.’’