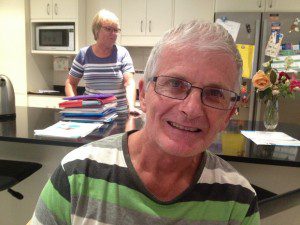 Kim and Lance Fleming at home: it took five years to find out Lance had dementia.

One Saturday in September 2010 local postie Lance Fleming was playing a round of golf when his wife Kim called him on the mobile.

She told him that there had been an emergency and he needed to get home straight away.

Kim put her phone away and jumped into a police van to support a family member in distress. Lance on the other hand just resumed playing golf.

Which was completely out of character.

Kim didn’t know it then but her husband of 32 years was on the way to being diagnosed with dementia.

♦ On average it takes two to three years before someone is diagnosed with dementia but it took the Flemings almost twice that.

And Kim Fleming lost count of the number of hoops she had to jump through over the next five years before they finally found out Lance had dementia.

But tough as that period was for Kim and Lance as they went from doctor to doctor and hospital to hospital, the worst part was something else.

“I was so upset much of the time because I didn’t know what we were trying to find out,’’ Kim said.

But they had to start somewhere, so they went to see their local doctor, who organized for Lance to see a neurologist.

Following an MRI scan in December, they sat down with the neurologist who told them that Lance may be suffering from depression.

Kim didn’t know it then, but sometimes depression is one of the early signs of the onset of dementia.

All Kim could do was watch as her husband’s memory started failing him, to the point where in July of 2010 he came home from work with some bad news: Australia Post had demoted him from team leader to postman on a motorbike.

“He just came home and told me, but didn’t say anything about why and what they had said to him at work,’’ Kim says.

“I didn’t hear anything from work, no phone call, no letter, nothing,’’ Kim says.

♦ Lance Fleming was born in Temora in 1952, the second of four kids, three boys and one girl.

At the age of 17 Lance packed his bags and headed to the big smoke, where a job with Australia Post at Strathfield was awaiting.

Work brought them together in the 1970s because as it happened Kim also worked for Australia Post out west in Mt Pritchard.

They married and moved to their new home at St Andrews the same year, 1978, and had three children, Dean, Kerryn and Jason.

The next couple of decades flew by as the kids grew up and Lance kept working at Australia Post, started playing touch footy and golf, as well as going for a fitness run on a regular basis.

At one stage Lance left the post office job to take up a job as the general manager of Campbelltown Touch.

A local sports journalist, Paul Haigh, dubbed him Mr Touch and Kim Mrs Touch during the time Lance was running the touch association.

After a few years Lance returned to Australia Post.

Kim meantime was pleased to see she had married not only a good husband and father but a bit of a handyman, too.

“Yes, he was good around the house, he fixed all the things that needed fixing, including small electrical jobs, but that’s gone now with the dementia,’’ Kim says.

“One time (in September 2014) he tried to fix a power point but ended up cutting off our entire electricity supply and we had an extension lead running from our next door neighbor to keep the fridge going.

“I don’t know how he managed to avoid seriously hurting himself that time.’’

♦ Between February and March 2011 Lance had been involved in three minor accidents at work so one day in in April he comes home and tells Kim he would no longer be allowed to drive the motorbike to deliver the mail.

“Australia Post gave him the option of a pushbike or walking and he chose to walk to deliver his mail,’’ Kim says.

But still nobody from work tried to contact Kim or any other member of the family to inform them of how Lance was going.

In the meantime, trying to find out what was wrong with Lance had quickly become the main focus in the Fleming household at Eagle Vale, where they had moved to after selling their St Andrews home a few years earlier.

Lance managed to get through the next few months walking his mail beat and 2012 was mostly uneventful, but in 2013 he had a bad fall on his pushbike after work and required a shoulder reconstruction.

He was on sick leave during his rehabilitation from the injury but when he returned to work he was told he had been taken off the walking beat as well. From then on he was only assigned relief beats and indoor duties, he told Kim when he came home that day. 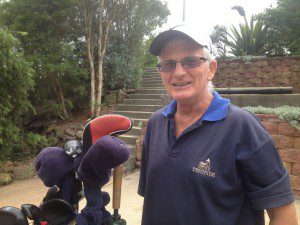 Lance Fleming at Macarthur Grange Golf course a couple of weeks ago.

♦ In January last year, almost five years after the first demotion, Australia Post sent Lance home with a stark message: You need to see a doctor.

The same routine followed: he told Kim what happened, but the difference was that he never went back to work again after Kim decided to ring Australia Post and ask them what was going on at work with Lance.

She was told by someone, not sure who that was, that Lance was “very confused’’ and there were concerns he would get lost if allowed to deliver mail. Also, Lance could not learn a new scanning system that had just been introduced in the post office. Plus he was not mixing with anybody at work.

Kim wasn’t really surprised by any of that because she could see Lance changing right in front of her own eyes. 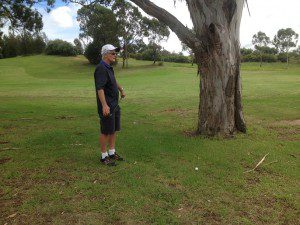 There was obviously something wrong with his memory as well as his lack of empathy, and he often seemed confused. In company he easily lost interest in what others were talking about.

A formal diagnosis was still nowhere in sight more than four years after the first signs became evident.

“I still didn’t know what was wrong with Lance,” Kim recalls of the time around January 2014.

And that was the worst part of going from doctor to neurologist to geriatrician to clinical nurses, from one hospital to another for blood tests and neurological assessment:

“I was despairing for all those years because I just didn’t know why I was doing all this,’’ Kim said.

♦ Their first breakthrough came out of the blue.

It’s June 17, 2014, Kim answers the phone and it’s a clinical nurse from the Sydney South West Dementia and Delirium Service.

Her name is Kylie Kirkham, and after a brief discussion with Kim arranges to come out to their home to perform some tests on Lance.

“She did a few tests and then asked him to name 10 animals, any animals, and he could only think of three, he didn’t even mention cats and dogs,’’ Kim says.

After the tests, this nurse was the first person in nearly five years to say what was wrong with Lance.

“She said to me that Lance may have the early onset of dementia,’’ Kim says.

“At least now we had something to work with; we knew what we were dealing with finally. The nurse suggested we get a geriatric assessment as the next step.’’

Kim hit the phones and her first port of call, Camden Hospital, ended in disappointment.

Lance, at 62, was too young for such an assessment, she was told.

“We don’t do geriatric tests for anyone under 65, they told me.’’

At a loss about what to do next, Kim calls the clinical nurse for advice, and Ms Kirkham suggests trying the Liverpool Hospital clinic and Bankstown Hospital.

As a backup, the nurse gives them the contact details of a private geriatrician, Dr Mariann Joseph at Green Valley.

Dr Joseph saw Kim and Lance on August 25 and she gives it to them straight: frontotemporal dementia  cannot be ruled out.

At around the same time they get to see Professor John Hodges, a research fellow on frontotemporal dementia at the Prince of Wales Hospital, who tells them Lance could also have palsy!

“It took us all those years to find out he had something wrong with him and now we may have two things wrong with him,’’ Kim says.

But at least they were finally getting there, perhaps not the end, but certainly the end of the beginning of Lance’s dementia diagnosis journey.

♦ At some stage Kim realised that she needed to start keeping a record of everything to do with Lance, from the names of doctors and services available to what they had said to her. It was both a logical step and a coping mechanism with the avalanche of information she had to deal with. Here is a sample of Kim’s diary entries from last year:

June 14 rang Camden haven’t heard about ACAT assessment they had faxed reports to iiihub – ring them they can’t do anything ring Camden back.

June 14   Told by Camden they don’t see anyone under 65 get a referral to see Dr Chan Bankstown Hospital. GP won’t give us a referral until we have seen neurologist at Campbelltown Hospital

20th June 14 had home visit from Sydney South West Dementia and Delirium Clinical Nurse (think iiihub must have organised) did a MMSE ? assesment 22/30. Told we need a geriatric assesment.

♦ Another breakthrough lifted Kim’s spirits in September:  They check out what’s on offer at Dementia Month at Camden Civic Centre.

“We picked up lots of good advice, including stay in the public hospital system as it leads to easy access of records through the system.

♦ Lance finally resigned from work once all of the diagnoses had confirmed that he was suffering from frontotemporal dementia, which is the type of dementia that afflicts people under the age of 65.

“We were lucky that Lance had so much sick leave as it took  eight months before getting a diagnosis and then being able to utilise the services and programs available,’’ Kim says.

Kim is now Lance’s fulltime carer, having given up her work last year, while part of his treatment includes Tai Chi, among other activities, at Camden Hospital’s Broughton House, which is located in Rosemeadow.

He also attends, once a week, a dementia class at Myrtle Cottage, Ingleburn.

Looking back Kim is still upset at both the process she and Lance went through as well as the outcome.

“Younger dementia patients just have so much more to lose, their job, the handyman skills,’’ she says during a three and a half hour interview at their Eagle Vale home.

“I was really angry at one stage at what had happened.

“If you are old when you’re diagnosed with dementia, you’re more likely to have retired and not be as active as someone like Lance was when dementia arrived.

“The older you are the les you have to lose,’’ Kim said.

“We can’t plan for anything now – how do you plan anything when you don’t know what’s around the corner.

“Dementia is a terrible thing, it changes everything in your life.’’

More than 40 years experience in the news media, most of them as editor of local newspapers across the Sydney metro area, but a few years working as a sub-editor with the metros. Lots of awards, both as a reporter and editor, but says he values just as much Community Service Awards from Campbelltown City Council in 2004 and 2016. Took a voluntary redundancy in 2014 from Fairfax Community Newspapers after 21 years there. Loves the digital world, because ''there's no question it's the future''. Eric promises his hard hitting but fair approach won't change when he reports the news via cyber space.
View all posts by Eric Kontos
Charity race night: Mayor Lake calls for legacy of support
Business cleans up its act in laneway