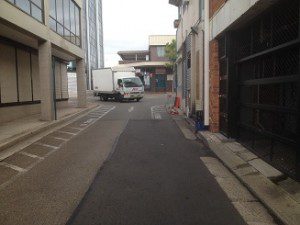 Neat as a pin: the entrance to Northumberland Serviceway Lane on Wednesday

Only a week after Liverpool Council vowed to get tough with adjoining shopkeepers, Northumberland Serviceway Lane looks cleaner and neater than it has for a long time.

At its meeting last week, the council voted to even consider fining shopkeepers who did not clean up their rubbish in a timely fashion.

The issue arose via a notice motion tabled by Labor councillor Anne Stanley, in which she called for steps to ensure all garbage bins in the lane were properly stowed within the premises of the business.

A report to council said that these issues have existed for many years. It said that leaving rubbish in the lane may pose a health risk as it attracted rats and other vermin.

“This is almost an intractable problem that’s been going on for years,’’ Cr Stanley told the council.

“And while we want to fix this problem we want to make it clear that this is not business-bashing.

“But it is a serious issue and maybe we should even consider fining people.’’ 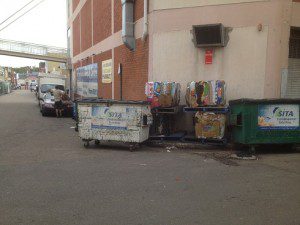 The southern end of the laneway.

Former mayor Wendy Waller urged the council to take quick action, something the chief executive officer, Carl Wulff, said was already been done, with officers reviewing the use of the lane.

Mr Wulff said letters had been sent to shop owners backing onto the lane, requesting removal of bins from there.

He said council officers will follow up the matter to ensure compliance.

The inspection by the South West Voice on Wednesday showed that for the time being at least the message from council is being heard.

The laneway at the Coles Arcade point.

More than 40 years experience in the news media, most of them as editor of local newspapers across the Sydney metro area, but a few years working as a sub-editor with the metros. Lots of awards, both as a reporter and editor, but says he values just as much Community Service Awards from Campbelltown City Council in 2004 and 2016. Took a voluntary redundancy in 2014 from Fairfax Community Newspapers after 21 years there. Loves the digital world, because ''there's no question it's the future''. Eric promises his hard hitting but fair approach won't change when he reports the news via cyber space.
View all posts by Eric Kontos
Lance Fleming’s long and winding road to dementia diagnosis
Intermodal delegation express concerns to minister