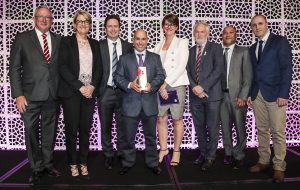 A local health district program that makes life less stressful for patients with tricky veins has been so effective hospitals in the US, UK and Canada have adopted it.

“One in three patients has veins that are difficult to see or feel,’’ Ms Larkin said.

“Our catheter program team is making sure a cannula is put in the first time and with little pain.

“The biggest thing we want to avoid is distress and pain for the patient.”

It was one of two awards taken out by SWSLHD this year.

Janette Du Buisson Perrine, who has spent the last 20 years giving her time to improve services and facilities for people with a mental illness in SWSLHD was named Volunteer of the Year. 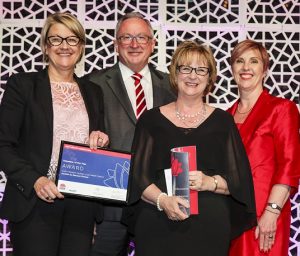 Volunteer of the Year: Elizabeth Koff receives her award.

“The wonderful work our volunteers do, including Janette Du Buisson Perrine, does not go unnoticed,’’ Ms Larkin said.

“She has been chair of our mental health consumer, carer and community committee since 2014, an outstanding contribution.”

There were 33 finalists from 14 state wide health entities competing for 11 award categories.

Minister for Health Brad Hazzard joined with staff, clinicians and academics to pay tribute to the wide array of health professionals who work tirelessly to improve the delivery of care to patients across NSW.

“The winning projects demonstrate the depth of talent and creativity that runs through NSW Health,” he said.