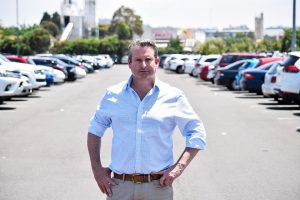 “Bitterly disappointed”: MP Greg Warren is upset Campbelltown commuters won’t be getting a new carpark from the state government after all.

A “bitterly disappointed’’ Campbelltown MP Greg Warren says it looks like long suffering Campbelltown commuters won’t be getting a new 450 space carpark after all.

The state government wanted council to sacrifice prime real estate on Farrow Road for the carpark.

The council offered to create a temporary car park on the Farrow Road site while the Langdon Avenue complex was built, however the state government was unwilling to negotiate.

Mr Warren said the state government had abandoned the project and broken a promise to not only the people of Campbelltown, but the entire Macarthur region including Camden and Wollondilly.

The promise to build a commuter carpark was made by Premier Gladys Berejikilian while transport minister during the campaign for the 2015 election.

“This was never about providing overdue relief for Campbelltown commuters – it was simply a desperate attempt to win votes,’’ Mr Warren said this week.

“The council’s option was sensible and practical – the state government’s was not.

“The premier – in her capacity as transport minister – effectively made a promise to build parking on land owned by Campbelltown ratepayers without consulting the council first.

“When the government didn’t get its way, it packed up its bat and ball and went home sulking,’’ he said.

Mr Warren also said it added insult to injury that the government refused to commit to building a multi-storey commuter car park given its Glenfield to Macarthur Urban Renewal Strategy would turn Campbelltown into a haven for high-rise development.

More than 4,000 people have a signed a petition instigated by Mr Warren calling for a multi-storey commuter car park in Campbelltown.

More than 40 years experience in the news media, most of them as editor of local newspapers across the Sydney metro area, but a few years working as a sub-editor with the metros. Lots of awards, both as a reporter and editor, but says he values just as much Community Service Awards from Campbelltown City Council in 2004 and 2016. Took a voluntary redundancy in 2014 from Fairfax Community Newspapers after 21 years there. Loves the digital world, because ''there's no question it's the future''. Eric promises his hard hitting but fair approach won't change when he reports the news via cyber space.
View all posts by Eric Kontos
Innovation makes life easier for patients
Oran Park library for the 21st century wins major award

One Response to Commuter carpark plan in tatters