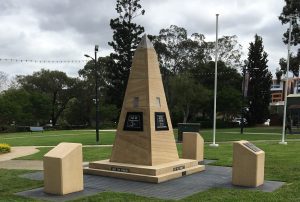 Lest We Forget: A new memorial honouring the Armistice Centenary and the sacrifices made by Australian servicemen and women will be unveiled tomorrow in Mawson Park, Campbelltown as part of a Remembrance Day commemoration.

A memorial honouring the Armistice Centenary and the sacrifices made by Australian servicemen and women has been built in Campbelltown’s Mawson Park to commemorate 100 years since the end of World War I.

The Armistice Centenary Memorial will be unveiled tomorrow (Friday, November 9) during a Remembrance Day Commemorative Service for Schools called A Day to Remember, which will start from 10am.

A Day to Remember will be held in the lead up to Remembrance Day on Sunday, November 11, which this year will carry additional meaning because it will mark a century since the guns fell silent on the Western Front.

An Armistice Centenary Memorial is also being built in Ingleburn’s Milton Park.

Mayor of Campbelltown, Cr George Brticevic said the Armistice Centenary Memorials will be a permanent mark of respect and recognition of the sacrifices made by the Australians who served in World War I, as well as the contributions made by their families, friends and other Australians at home during this difficult time.

“We wanted to pay our respects and honour the efforts and bravery of our servicemen and women,’’ he said.

“It’s because of the sacrifices they made in war that we are able to live in peace and freedom in Australia today.

“The Armistice Centenary Memorials will also enable our younger and future generations to remember and recognise Australia’s military past and the bravery of those who went to war.

“The memorials will keep our Anzac spirit alive for future generations to come.’’ 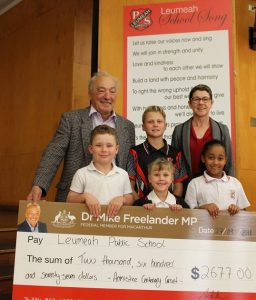 The memorials are part of the Federal Armistice Centenary Grant Program.

Thanks to these grants, scores of local schools will also be holding ceremonies tomorrow to mark 100 years since the end of the Great War.

St Patrick’s College for Girls, which will also honour the Anzacs of Macarthur, promises to be one of the more memorable ones.

The ceremony was organised by the school’s history club, who have been working since March on the decorations and videos.

There are 100 students in the history club; the school’s total enrolment is about 700 students.

St Patrick’s College will also pay homage to the four World War I memorials in the old Congregational Cemetery next door to the school in St John’s Park Road.

There will also be a commemorative olive tree planting.

Dr Mike Freelander, the federal member for Macarthur, who will be attending the St Patrick’s and Mawson Park commemoration ceremonies, said Australia’s World War I campaign took a brutal toll on our young nation.

“There were more than 60,000 casualties and 165,000 men wounded, gassed or taken prisoner- our story on the Western Front still holds significance in Australia today,’’ he said.

“While this day is a significant milestone in our military history, we reflect and remember all of those men and women who have served our country.

More than 40 years experience in the news media, most of them as editor of local newspapers across the Sydney metro area, but a few years working as a sub-editor with the metros. Lots of awards, both as a reporter and editor, but says he values just as much Community Service Awards from Campbelltown City Council in 2004 and 2016. Took a voluntary redundancy in 2014 from Fairfax Community Newspapers after 21 years there. Loves the digital world, because ''there's no question it's the future''. Eric promises his hard hitting but fair approach won't change when he reports the news via cyber space.
View all posts by Eric Kontos
Strategic location entices another head office in Campbelltown
Innovation makes life easier for patients