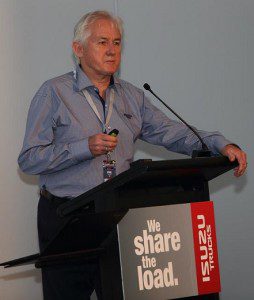 Like it or loathe it, the urban freight distribution task in Australia is critical to the country’s economic development and continued overall success.

Road transport of our goods and services remains the most prevalent mode of freight, but also the most maligned – due to the shared use of urban areas.

Add to this mix the time and subsequent cost of the broader distribution task, and you’ve got a complex equation with a multitude of potential solutions.

“The European and North American brand of urban road congestion is well and truly upon us, here in Australia,” he said.

“Take for instance the vast geographic footprint of urban of Melbourne, Sydney and Brisbane – issues of grid-lock and contested space are becoming more and more prevalent.

“Our collective approach to providing viable solutions to these emerging problems must be anchored in a level of astuteness and intelligence.

“We have the opportunity to learn from the experience of mega-cities around the world and have a mature discussion around concepts like shared freight infrastructure and collaboration,” he said.

Mr Taylor’s comments come as Isuzu Trucks introduce the 2015 N Series to the Australian market – one of the safest and most intelligent light duty offerings available.

He said the optimisation of logistics and transport is becoming increasingly reliant on productive, reliable and intelligent ‘end user’ equipment such as telematics.

“It’s what you find underneath the skin that counts when it comes to equipment,” he said.

“The development of an OEM telematics solution in-house by Isuzu makes for a seamless integration of the system into the truck and provides a powerful tool for truck operators to increase not only operational visibility, but importantly productivity and efficiency.

“This is exactly the type of innovation informing the enhanced performance of products like the 2015 Isuzu N Series.

“It’s also why the model is still the country’s most practical urban freight solution some 26 years after capturing the number one spot,” Mr Taylor said.

“Census research confirms that use of light rigid trucks for the urban freight task is on the rise, but it’s a matter of applying the most intelligent solution to achieve genuine efficiencies both on our roads and on the business bottom line.”

More than 40 years experience in the news media, most of them as editor of local newspapers across the Sydney metro area, but a few years working as a sub-editor with the metros. Lots of awards, both as a reporter and editor, but says he values just as much Community Service Awards from Campbelltown City Council in 2004 and 2016. Took a voluntary redundancy in 2014 from Fairfax Community Newspapers after 21 years there. Loves the digital world, because ''there's no question it's the future''. Eric promises his hard hitting but fair approach won't change when he reports the news via cyber space.
View all posts by Eric Kontos
It’s time: Cabramatta resident elected Prime Minister of Australia
Drums beating for massive housing boom