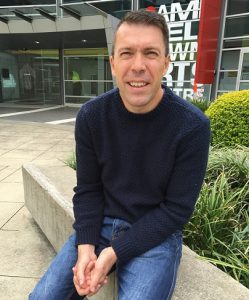 George Brticevic, who will be the mayor of Campbelltown for the next four years, outside the art gallery.

Fasten your seatbelts, Campbelltown, the next four years are going to be a ride on the wild side.

After more than 10 sedate years, the man who will be our mayor for the next four years, George Brticevic, wants to get a hell of a lot of things done while at the helm.

He says the main focus will be on creating local jobs.

A new business park near Blaxland Road with more than 5,000 new jobs, the massive expansion of Macarthur Square and Narellan Town Centre and the construction of Badgerys Creek airport will drive the growth in local employment, says the Labor leader, who has already been endorsed by his party to be mayor for the entire term of the new council.

“When you’re campaigning at stations, you see people coming off buses, getting on the trains and they’ve got the blinkers on because they’re running late,’’ he says.

“They’ve got to travel into town, they’re tired, so the Campbelltown business park is about getting a decent level of employment locally, and hopefully we’ll stop some of those people from having to travel to work,’’ Cr Brticevic says.

Next Tuesday night, September 27, George Brticevic, the 43 year old father of two teenagers, will be confirmed as the new mayor of Campbelltown for the next two years.

But there’s no doubt that unless he gets run over by a bus Cr Brticevic will get re-elected in two years, simply because Labor has the numbers after receiving huge support at the September 10 local government elections.

Seven of its candidates were elected to the 15 seat council.

“I am delighted and humbled to be nominated,’’ Cr Brticevic said yesterday.

“I have lived in Campbelltown all my life,’’ he said.

“It’s where I was raised, went to school and raised our children with my wife Monique.

“To have an opportunity to serve this city as mayor is a tremendous privilege.”

Cr Brticevic promises to hit the ground running from the moment he’s elected to the top job just after 7pm next Tuesday.

“We have talked about the business park on the western side of the railway near Farrow Road, now let’s get it done,’’ he says. 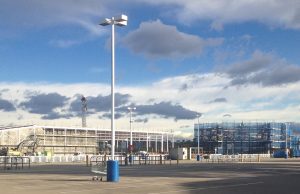 “Macarthur Square having an expansion, and so is Narellan Town Centre, and that means local jobs which are good for young and older people and families as well.’’

Cr Brticevic says when it comes to industrial estates, council will push for tenants with lots of jobs to offer locals.

“We don’t want to see warehousing in our industrial areas, there are no jobs in that, we want manufacturing, research, medical development – we want lots of jobs,’’ he says.

Another big local jobs boost on the way is a byproduct of the construction of an international airport at Badgerys Creek.

But while Cr Brticevic says Campbelltown welcomes the jobs the airport will bring, he will insist on a curfew when it opens in six or seven years.

“The airport’s going to happen, we know that, I think it’s a good thing in term of jobs, as long as the infrastructure is there, they put the trains in, the roads, and people can go to work there or to get on a plane,’’ he says.

“I want Badgerys Creek to be a proper airport, but I don’t want it to be operating 24 hours a day.

Cr Brticevic is keen to point out that he won’t just be looking at the big picture stuff over the next four years.

He says he will support other councillors’ “pet projects’’ if they are worthwhile, but also look at replicating infrastructure projects that neighbouring councils have achieved.

“I look at other councils, like Camden at Mt Annan with their regional park, I’d want to do that at Milton Park, Ingleburn, but I want to do it better,’’ he says.

“I want to do it so it’s also for children with special needs and vision impaired, so it’s for the whole community. 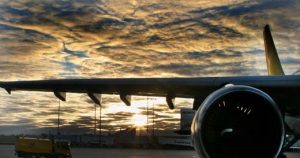 Cr Brticevic says he welcomes the airport at Badgerys Creek and the jobs it will bring, but he will insist on a curfew.

“At Carnes Hill, Liverpool Council, which in my view has been a bit dysfunctional in recent times, has created a precinct with a library and an outdoor space with basketball courts and a skate park.

For many years Campbelltown has been a member of the Macarthur Regional Organisation of Councils – MACROC – which was set up to lobby on behalf of the three neighbouring councils.

But many people are questioning the value of having such an organisation, and the mayor-to-be is one of them.

“We will definitely have a good, hard look at MACROC,’’ he says.

“We’re a suburban regional city, Camden has a bit of both suburbia and rural, and Wollondilly is semi rural.

“So we have different needs and we’re not always on the same page.

“Here in Campbelltown I think we’re big enough and strong enough to voice our own concerns, through our own ways, so I can see an economic, tourism, development section within council that only concentrates on Campbelltown,’’ Cr Brticevic says.

“To be honest, four years on council, apart from glossy brochures and being invited to [MACROC] breakfasts with keynote speakers I don’t know what they do.’’

Cr Brticevic is also rather forthright when it comes to what it means to have regional city status, which was conferred on Campbelltown last year by Macquarie Street.

“I am not sure, maybe it’s an ironic thing because we seem to be losing things since becoming a regional city,’’ he says.

“We are still waiting to hear about the next stage of the Campbelltown Hospital, which is planned but not funded.

“We are waiting on our multi deck carpark on Farrow Road, and we were supposed to have a Service NSW Centre but it’s gone to Gregory Hills, so I don’t know what it means to be a regional city.

“But what I will be doing is lobbying hard so that we get our fair share of funding for capital works and infrastructure, so we can be that regional city and a great city.’’

More than 40 years experience in the news media, most of them as editor of local newspapers across the Sydney metro area, but a few years working as a sub-editor with the metros. Lots of awards, both as a reporter and editor, but says he values just as much Community Service Awards from Campbelltown City Council in 2004 and 2016. Took a voluntary redundancy in 2014 from Fairfax Community Newspapers after 21 years there. Loves the digital world, because ''there's no question it's the future''. Eric promises his hard hitting but fair approach won't change when he reports the news via cyber space.
View all posts by Eric Kontos
STEM Challenge: St Patrick’s College leading by example
MP says local police doing a fine job

3 Responses to By George, excitement level in Campbelltown about to go up a notch