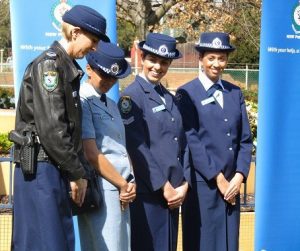 MP Greg Warren says the local police are doing such a fine job they deserve a pat on the back.

“I commend the Campbelltown Local Area Command for its hard work in keeping our community safe and in helping to make Campbelltown a community for all,’’ Mr Warren told State Parliament this week.

“Since the early years of settlement the Campbelltown Local Area Command has been on the community frontline, and it has worked to ensure that all residents can feel safe and well protected from harm,’’ he said.

“Over the past 100 years the command has grown significantly from its humble beginnings to being one of the largest local area commands in this State.’’

Mr Warren said that as the Campbelltown region has one of the largest populations in NSW it makes the work of our local police all the more challenging.

“He and his senior team, including, but not limited to, Detective Inspector Greg Inger and Detective Senior Constable Justin Gallagher, have worked hard over the past few years to reduce the crime rate in the Campbelltown region – as have others before them.

“The latest statistics from the NSW Bureau of Crime Statistics and Research show that from the end of 2014 to the end of 2015 the overall incidence of crime fell by 3.5 per cent.

“This is the result of the local command’s hard work in policing crime and creating a positive environment in the Campbelltown region,’’ Mr Warren said.

The Campbelltown Local Area Command has also been at the forefront of domestic violence prevention across the region. 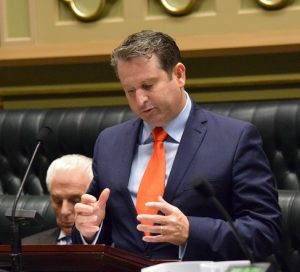 In praise of local police: MP Greg Warren speaking in parliament this week.

It has put in place early prevention schemes to ensure that domestic violence is stopped as early as possible and has also been heavily involved in the Campbelltown Domestic Violence Committee.

This community-led group, which is comprised of representatives from more than 20 organisations across the region, aims to drastically lower the rate of domestic violence in the region.

The Campbelltown Local Area Command has also been involved in the White Ribbon organisation.

“Our local police are working closely with the White Ribbon organisation to help stamp out domestic violence in our community. I commend both groups for their hard work,’’ Mr Warren said.

The latest crime statistics show an 11 per cent drop in the number of domestic violence incidents over the past 24 months in the Campbelltown region.

“We need to do much more to lower the rates of domestic violence, but I have every confidence that Superintendent Benson and his team will continue their tireless work and this rate will fall,’’ he said.

More than 40 years experience in the news media, most of them as editor of local newspapers across the Sydney metro area, but a few years working as a sub-editor with the metros. Lots of awards, both as a reporter and editor, but says he values just as much Community Service Awards from Campbelltown City Council in 2004 and 2016. Took a voluntary redundancy in 2014 from Fairfax Community Newspapers after 21 years there. Loves the digital world, because ''there's no question it's the future''. Eric promises his hard hitting but fair approach won't change when he reports the news via cyber space.
View all posts by Eric Kontos
By George, excitement level in Campbelltown about to go up a notch
Make botanic garden one of your destinations these school holidays