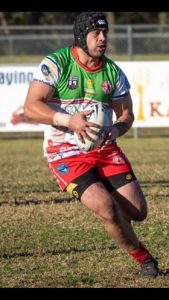 A superb second half defensive effort helped East Campbelltown Eagles down Wentworthville 30-10 in Sunday’s top of the table clash at Waminda Oval.

The Eagles kept a clean sheet in the second stanza, while their attack was on song.

All up it was a dominant display from the Eagles, who are up to their necks in the 2018 premiership race.

Playing for the Ben Stevens Memorial Cup and using the day to promote headspace, the Eagles went to an early lead after a try to Grant Lahey.

Wentworthville hit back to level the scores before Shannon Gallant put the Eagles in the lead with the first of his three tries.

Sean Connor converted Gallant’s touchdown for a scoreline of 10-4 in favour of the home team.

Wentworthville hit back again to be level on the scoreboard, but when Shannon Gallant scored his second the Eagles went to the halftime break leading 16-10.

There were some huge hits in the first half, which were very much appreciated by the fans who braved the freezing conditions to go out and support their team.

The second half was all East Campbelltown, who opted for a penalty goal to extend their lead to 18-10 before Craig Moustakas scored in the corner from a classic Brett Lahey pass for a 24-10 lead.

Gallant got his third and with Connor’s conversion the Eagles ran out winners 30-10.

The two teams after the match.

“The Ben Stevens day is always an emotional game for our boys and they responded well, and played with plenty of heart.’’

The club had another successful weekend with the reserve grade running out winners 40-4, a huge win from the open women’s team defeating competition leaders Forrestville Ferrets 22-20.

The Eagles under 20 suffered their second loss for the season when they went down 26-10 to Ryde-Eastwood.

Senior teams will again be at home this weekend with games from 10.30am at Waminda Oval.

In the Sydney Shield, the Eagles will tackle fourth placed Moorebank Rams at Hammondville Oval on Sunday at 3pm.

One Response to Gallant hat-trick, but second half defence wins it for Eagles