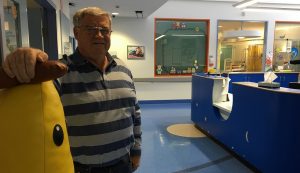 Cr Paul Lake in the pediatric ward of Campbelltown Hospital today: we can pay for a children’s ICU ourselves.

The veteran councillor says he wants council to pay for the intensive care unit (ICU) to help get it off the ground.

“The State Government has committed to a $632 million redevelopment of our hospital and I am just talking about $3, $4, $6 million for an intensive care unit for our children,’’ Cr Lake said.

“No excuses, the whole thing can be done, it’s just sometimes people like to put up barriers and reasons why it can’t be done.’’

Cr Lake will table a notice of motion at the next meeting on July 10 calling on council to vote to spend $6 million of the Cities Deal Liveability Fund towards the running cost of a pediatric ICU at Campbelltown Hospital over two years.

“But if the other councillors want to contribute all $18 million of the Liveability Fund money, to have $6 million a year over three years, giving us six beds, I am quite happy to go that way,’’ Cr Lake said.

If anyone knows whether an ICU is needed in this region is Dr Mike Freelander, a paediatrician for more than 30 years who was elected to federal parliament in July 2016.

The Labor MP got the ball rolling on establishing a pediatric ICU here in Campbelltown when he spoke to Channel 7 reporter Sean Berry recently.

“We transfer too many children, particularly with respiratory illness, from Campbelltown and Camden to the major teaching hospitals.

“We have a number of children with asthma, little babies with bronchiolitis, who require a day, a day and a half, sometimes two or three days in intensive care getting respiratory support, and then can go home and they’re fine,’’ he said. 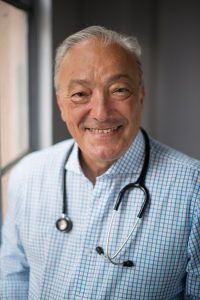 “To actually transfer one of those children is quite traumatic, and it’s very traumatic for the families – they have to travel long distances.

“If we have a pediatric ICU we can keep these kids in Campbelltown; we’d probably get them out of hospital sooner, I believe, and we would also relieve a lot of stress from the families.

“We do transfer too many children, and this would be about keeping them in Macarthur, in high level care, safe care, and there’s no doubt we need it.

“We have so many children in Macarthur now that there is a need for this facility,’’ Dr Freelander said.

“We don’t want second best for the south west anymore – we want the best care we can give our kids.

“They deserve it and the government should be providing it.’’

Dr Freelander said that with almost 34,000 children in Campbelltown aged 14 or under – almost 20 per cent of the total population – six to eight beds would be needed at a pediatric ICU in Campbelltown Hospital.

The NSW Government has committed $632 million to stage two of the hospital redevelopment, which will include an expanded emergency department, a new paediatric precinct, additional intensive care beds, enhanced mental health services and improvements to ambulatory care and outpatient services.

But not a pediatric ICU.

“This is a great idea, a great cause to put the money towards, to help our young children to overcome their illnesses, to give their parents peace of mind, because they won’t have to travel miles and miles to the inner city to look after their children,’’ Cr Lake said.

“This will cater to the whole of Macarthur region and the Southern Highlands, and Wollongong/Illawarra.

“I can’t think of a better way to spend some of the Liveability Fund money.

“This would be the best thing to put that money into, much better than putting it into the arts centre or the sporting fields,’’ Cr Lake said.

More than 40 years experience in the news media, most of them as editor of local newspapers across the Sydney metro area, but a few years working as a sub-editor with the metros. Lots of awards, both as a reporter and editor, but says he values just as much Community Service Awards from Campbelltown City Council in 2004 and 2016. Took a voluntary redundancy in 2014 from Fairfax Community Newspapers after 21 years there. Loves the digital world, because ''there's no question it's the future''. Eric promises his hard hitting but fair approach won't change when he reports the news via cyber space.
View all posts by Eric Kontos
Oakdale Workers out of first grade as Roosters continue dominance at the top
Gallant hat-trick, but second half defence wins it for Eagles