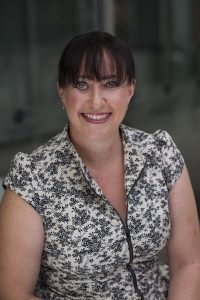 Labor candidate for Camden, Sally Quinnell says the area is growing fast and needs a strong voice in parliament.

Sally Quinnell says the way the Outer Sydney Orbital corridor was dumped on Camden was “an absolute disgrace’’.

The Labor candidate for Camden doesn’t pull any punches when it comes to the issue that has outraged the local community this year.

“The way this was delivered was disgusting and it was disrespectful, I believe,’’ she tells the South West Voice a couple of days before the June 1 deadline for submissions.

“People who live 50m from the proposed corridor line – the famous blue line – still have not received normal notification from Transport NSW and that’s not good enough,’’ says Ms Quinnell.

“If it wasn’t for community members fighting for the community, and standing up for the people around them, a lot of people would still not know about the Orbital corridor.

“This has caused a lot of stress to people and a lot of angst to a community who were going about their lives.

“People have real mental effects from this.

“My concern is that the government is saying, well, in the past we have done this and people power has worked.

“How many times do we have to go through this process before we admit the process is broken?

“People shouldn’t have to go through this level of stress before something’s done,’’ says Ms Quinnell.

The way she tells it, Sally Quinnell got involved in politics because of something Labor deputy leader Tanya Plibeserk once said: If no one stands up, the bad guys win.

“I thought: that’s 100 percent correct – if everyone expects someone else to do the job, then the only people who stand up are people with their own agenda. And that’s what you end up left with,’’ says Ms Quinnell.

Entering politics didn’t happen overnight or suddenly for Sally Quinnell, who won preselection for Camden about six months ago.

She admits it has been a bit of a gradual shift and it was running for council that was the pivotal moment. 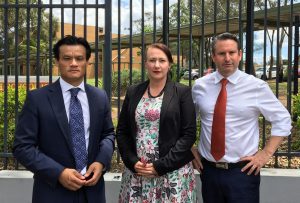 “I ran for council in the last elections, I was number two on Paul Farrow’s ticket, and that’s when I decided that all the issues I was really passionate about – education and health and transport – were state issues,’’ she says.

“And that’s when I really decided, yeah, that’s where I’m headed.’’

The Quinnells, who live in Ellis Lane, moved to Camden about 11 years ago with their two children.

Once settled here, Sally Quinnell, who has been a music teacher all her adult life, gave birth to their third child, who is now 10 years old and attends St Pauls Camden.

Ms Quinnell was initially a singer and played both the piano and the bassoon.

She taught music in primary and high schools for some years before starting her own business with a partner.

“We go into primary and high schools where they’d like a concert band program and we run that program,’’ explains Ms Quinnell.

The name of the business is … Bandemonium.

“We teach all the instruments that are needed, flute clarinet, saxophone, trombone, guitar, drums.

“When the school wants that band to go out there and represent the school, we organise that.

Looking ahead to the NSW election on Saturday, March 30, 2019 – just nine months away, Ms Quinnell says locals are concerned at the lack of transport infrastructure, not enough spending on schools and next to no planning to manage the massive growth of Camden.

“We’re looking at a local commute of an hour, an hour and a half a day, that’s bad for families, for couples, bad for the community because people have less time for volunteering because they get home late,’’ says Ms Quinnell.

“My husband was doing that, commuting to North Sydney, leaving at 6.30 in the morning and getting home at 7.30 at night.’’ 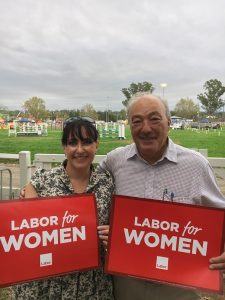 She also thinks Macarthur is getting a raw deal from the planning for a rail link to the airport at Badgerys Creek.

“The north south rail corridor is great, but it’s not happening, it’s more north-north; we need to have that rail line come right through to Macarthur,’’ she says.

“There’s no benefit to this area having an airport that sill takes us as long to drive to as Mascot.

“We need to be able to get to that airport, we need to have passenger rail service to there but also connected so it helps our local commuters.’’

On education, Ms Quinnell says that after almost eight years of the current government there are no fewer than 108 demountable classrooms in Camden.

There are 27 at Oran Park Public School alone and Camden South Public School, which is an older school, has 13 of them.

Some of them have been there for more than 10 years.

“Demountables become tin sheds, cold in winter, hot in summer, so the kids get lethargic, hard to get motivated,’’ she says.

“We need to make sure that our kids are in decent conditions that we ourselves would be able to work in.

“They need to be airconditioned and fit for the purpose, and not temporary solutions for permanent problems.

“The Government have had eight years to work on this.’’

Ms Quinnell believes Camden, which is experiencing huge growth, should be considered a special case when it comes to the provision of basic infrastructure and community facilities.

“No council in Australia is having growth like we are,’’ she says.

“So we are a special case and need to be treated as such to be making sure we get the support and infrastructure that we need.

“I had someone come up to me at Oran Park soccer fields last week and say to me: when are we getting our fire station? 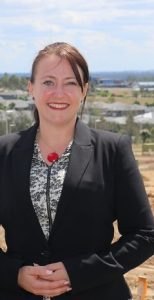 “And I said, I know, and he said, if there is a fire in Oran Park, who comes?

Which brings us to Chris Patterson, the current state member for Camden.

Mr Patterson won Camden for the Liberal Party in 2011 when he defeated Labor’s Geoff Corrigan.

In 2015 Mr Patterson won against current Labor councillor Cindy Cagney and holds the seat with a handsome 68 percent of the two party preferred vote.

These figures indicate Ms Quinnell will have a battle on her hands to beat Mr Patterson, but she is quietly confident Camden will be looking for someone new to represent them in Macquarie Street.

“It’s important to have a local member that will stand up and be a strong voice about the issues affecting our community, and we simply aren’t getting that from Chris Patterson,’’ Ms Quinnell said.

“The Orbital situation has shown that he is ineffective in getting out ministers to speak to the people of Camden.

“We haven’t had the voice we wanted, the presence that we need.

“I feel like we don’t have that strength, that presence in Macquarie Street to say the people of South West Sydney feel forgotten every time you launch something in another area, or for example the Premier comes out and mentions they want to slow development in one area of Sydney, hello, we need to think about what’s happening out here, we need a plan, and it feels like there’s a lethargy sinking in.

“An ineffectiveness of actually getting things done.’’

More than 40 years experience in the news media, most of them as editor of local newspapers across the Sydney metro area, but a few years working as a sub-editor with the metros. Lots of awards, both as a reporter and editor, but says he values just as much Community Service Awards from Campbelltown City Council in 2004 and 2016. Took a voluntary redundancy in 2014 from Fairfax Community Newspapers after 21 years there. Loves the digital world, because ''there's no question it's the future''. Eric promises his hard hitting but fair approach won't change when he reports the news via cyber space.
View all posts by Eric Kontos
Gallant hat-trick, but second half defence wins it for Eagles
Local smokers wanted for new quit study