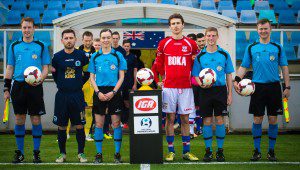 Whistleblower: Referee Katie-Louise Patterson made her debut at the game, which was the last one for Luke Glavas, pictured below after the match with his children.

THE final round match in the National Premier Leagues NSW Mens 1 match between Sydney United 58 FC and Sutherland Sharks at Edensor Sports Centre, which ended in a thrilling 3-3 draw, was a special day for Luka Glavas and referee Katie-Louise Patterson.

A stalwart of the Sydney United club, the tall, 29-year-old striker was calling it a day on an illustrious playing career and heading towards retirement after rounding out his playing days at the Edensor Park based club.

Glavas rose to national prominence when he featured regularly for A-League side Perth Glory a few seasons back.

Another note to the game was the debut of referee Katie-Louise Patterson, who took charge of her first senior game at this level.

It was great to see the young 24-year-old whistle blower finally break through the glass ceiling of refereeing in Australia. And what a competent performance she had out in the middle.

After the game a very pleased Glavas stated how he felt upon retirement: “It actually feels a bit weird” he said.

“I have spent a lot of my time here and pretty much my life has evolved around the club in the last 15 years or so.

“I am staying around for the Westfield FFA Cup, so I’ll be around at least for that.

“As for the game, it would have been nice to go out with a win but we’ll take a draw.

“It sort of sums up our season with close games but at least it was an entertaining game.”

From one captain to another, and Sutherland Sharks stalwart Nick Stavroulakis spoke about the game and his friend and counterpart Glavas.

“It was a great day for Luka, he was a really good competitor, a fantastic goalscorer and one player that will be missed in our competition,’’ Stavroulakis said.

“I am very happy for him that he scored two goals – I think we teed it up for him so that he could get his goal,” he said wryly. 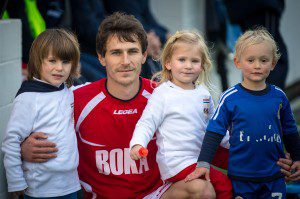