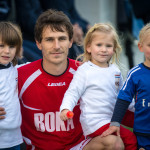 THE final round match in the National Premier Leagues NSW Mens 1 match between Sydney United 58 FC and Sutherland Sharks at Edensor Sports Centre, which ended in a thrilling 3-3 draw, was a special day for Luka Glavas and referee Katie-Louise Patterson. A stalwart of the Sydney United club, the tall, 29-year-old striker was… Read more »